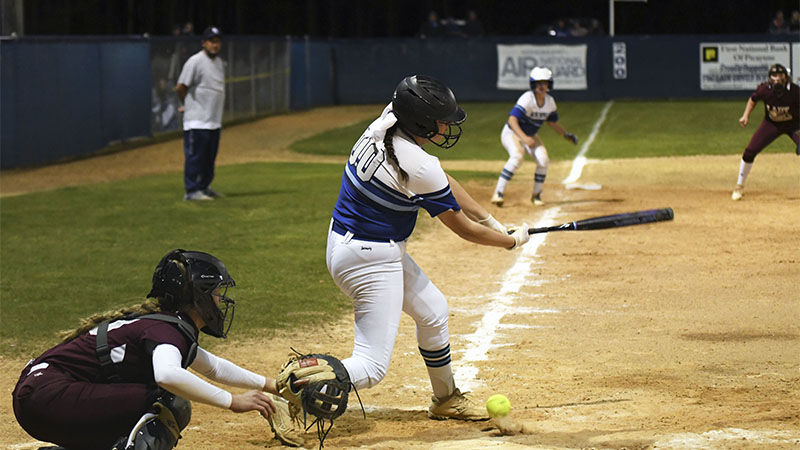 Jazmin Robertson was dominant on the mound, pitching a complete game while striking out three.

Jada Lindsey went 3-4 at the plate with two RBIs and drove in Anna Alexander for the winning run after Alexander went in as a pinch runner for Izzy Martin following a double by Martin.

It was the second one run win in two games with PRC defeating Stone County 8-7 in extra innings Monday night when Bayli Cucinello drove in Carsyn Cacioppo for the walk off victory.

The latest win over Hancock has put the Lady Blue Devils on a five game win streak, and Head Coach Tony Labella said the team’s comeback victory over Stone served as a springboard for the team’s win against Hancock.

“There were two different innings where we were down to our last out and a young team in times like that can fold under the pressure. Give the girls credit, they didn’t cave in,” Labella said.

Lindsey’s veteran presence in the line up hasn’t gone unnoticed. The senior joined the softball team after the season had already begun due to her commitments with PRC’s basketball team.

However, it hasn’t taken long for Lindsey to get comfortable in the box, and Labella said her offensive capabilities help the entire team.

“I know how hard she works. We knew it would take her awhile to get her hitting stroke back, but being a senior she knows the caliber of pitching she has to face at this level,” Labella said.

Next up for the Lady Blue Devils will be a non-district game against Perry Central at home on March 20.

Having won back-to-back nail biters, Labella is hoping his team comes ready to play Saturday against a Perry Central team that’s had a rough season so far.

“If they want to compete against Long Beach and Picayune then this is what we have to do. I would be disappointed if they didn’t come out to play Saturday because they saw how good it felt to win close games. I like where we’re going,” Labella said.