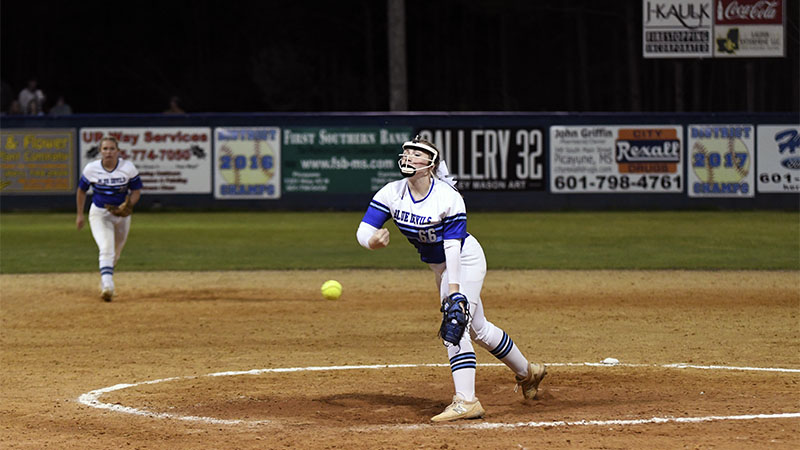 It all came down to the final inning in Tuesday’s close softball game between Pearl River Central’s Lady Blue Devils and the George County Lady Rebels that ended in a 5-4 win for PRC.

With runners at second and third and the game tied, freshman Baylee DeVore stepped up to the plate and hit a walk off, line drive single to seal the win for PRC.

Madison Smith pitched 3 1/3 innings with three strikeouts before Jazmin Roberston came on as relief and pitched the final 3 2/3 innings while striking out seven.

Bayli Cucinello had a good night at the plate going 1-4 with an RBI in a game that saw PRC maintain a lead until the seventh inning when George County tied the game 4-4.

However, DeVore’s clutch hit salvaged a win for the Lady Blue Devils as the team fought to overcome some defensive errors.

Head Coach Tony Labella said after the game that his team made the matchup tougher on themselves than it needed to be, and the players will need to tighten things up defensively moving forward.

“We get up 3-0, and instead of making it 6-0 or 7-0 and getting some clutch hits with runners in scoring position, you keep it at 3-0 and everybody’s hanging on every pitch at the end. We have a tendency to do that where we get a lead and think the game is over, but right now we don’t have a good enough defense at this point to say a one run, or two run lead is safe. We need more than that,” Labella said.