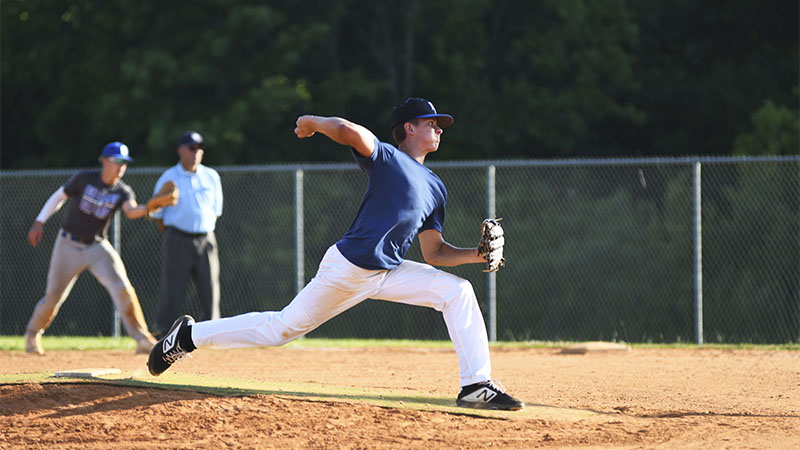 Nolan Walther got the start and went 4 1/3 innings while only giving up two runs on four hits and striking out five.

Heath Brunson then took the mound and closed out the game by striking out six while only allowing one hit.

Walther also contributed at the plate going 2-4 with two RBIs and two runs while Caleb Dyess went 1-3 with three RBIs.

Jacob Stockstill had the only homer on the night and went 1-4 with three RBIs.

Head Coach Neil Walther said his team did a good job of putting pressure on the Aggies’ defense, which contributed to the aggressive strategy on the base paths.

“They just allowed us to have it and we let it come to us. When you get guys on early in innings you’re able to do that a little bit more. It’s a result of having an awful lot of base runners and they weren’t able to hold us much,” Walther said.

Hits were evenly dispersed throughout the lineup for the Blue Devils with each athlete doing their part.

PRC’s balance offensively bodes well for the rest of the season, especially when the team starts taking on district opponents.

“We still have varsity experience, and when we have our regular lineup out there you have eight guys who played varsity last year. When we get going finally I think we’ll have guys throughout the lineup who can do positive things offensively,” Walther said.

In spite of the high number of runs against Forrest County, PRC wasn’t at full strength since three starters are currently out.

However, there’s a silver lining that comes with players missing time in that other athletes are getting more innings than normal.

“Very rarely do you go through a whole season and have everybody you’re counting on the entire season. It helps with depth and it’s just a next man up scenario. We’re confident in everybody we put out there,” Walther said.

The offensive outburst against Forrest County still allowed for some areas of improvement that Walther will be focusing on in the coming weeks, specifically at the plate.

Things are starting to click for PRC offensively and Walther wants to continue to see that upward trend as the team gets deeper into the season.

“There are 10 more games before district, so we have 10 games to figure out some things. I want to see them progress and have quality at-bats. A guy can go 0-3 and have a good day. I want good team at-bats moving runners and get a little better at doing that. We’re going to get there and the depth helps you get there,” Walther said.