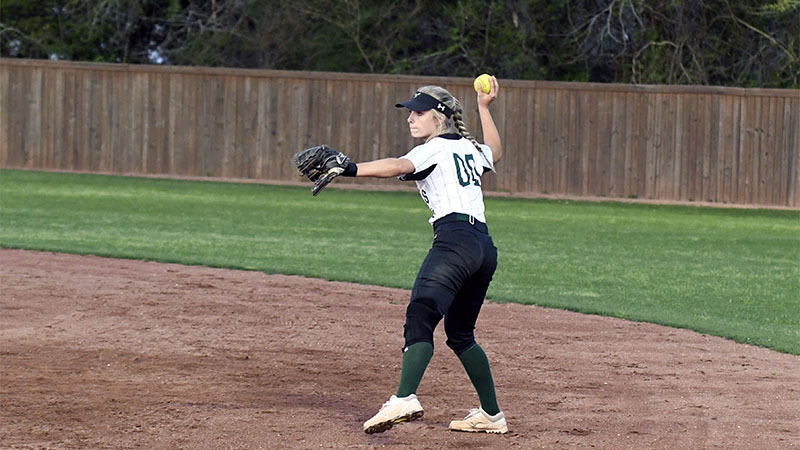 Infield: Madison Rester fields a ball and goes to throw to first base during Poplarville's game against Purvis. Photo by Jonathan Mitchell.

The Poplarville Lady Hornets and Purvis Lady Tornados went toe to toe Monday evening with Poplarville able to pull out the 8-7 win.

Madison Rester’s walk off bunt scored the winning run for the Lady Hornets in a game Poplarville trailed multiple times. Lily Tynes pitched a complete game while Daphne Rohrbacker had a double and two RBIs to lead Poplarville offensively.

Tynes saw Purvis plate three runners in the first inning, but was able to focus up and prevent any big rallies the rest of the game.

“She did really well just flushing that inning. They came out and scored early and she handled that,” Head Coach Janessa Deckwa said.

It wasn’t a perfect game by the Lady Hornets, but the team was able to fight through some errors to earn the hard fought victory.

“I’m so proud of them. Everybody down the lineup had a part in that, the dugout had a part in that. We played great defense, made a couple mistakes, but we held it down after that. They just answered back. Two different times we were down three runs and we came back each time, where as in past games when we got down like that you could count us out,” Deckwa said.

Poplarville’s bats finally got going in what has been an up and down season for the team offensively.

Deckwa said there haven’t been many instances where the team as a whole hit well this season, but against Purvis the Lady Hornets found some success at the plate.

“We talk a lot about going after other people. Sometimes we just wait for something good to happen instead of just getting in there and doing it early. They’re tired of losing ball games, we’re all tired of losing ball games. They’re sick of it and they know they’re good but they have had a bit of an issue with confidence lately, so this is a big win for us,” Deckwa said.Alongside some experienced players for Poplarville are youthful athletes getting their first taste of varsity action this season. Getting the win against Purvis could serve as a confidence boost for the youngsters as they grow more comfortable competing in highly competitive district games.

“We were 0-2 in district so to get that win on the other side is big for us. We have some young people on the field that have not been in this pressure situation before, so to just prove to themselves and the team that they can bounce back (is important). We made some errors, but we were still able to answer back, so I think it’s huge for our momentum moving forward,” Deckwa said.

Next up on the schedule is another important district matchup against Sumrall on April 6.