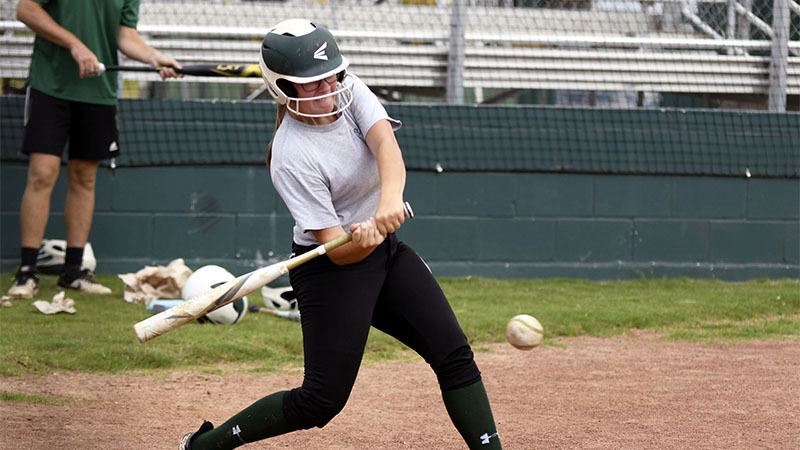 Game Face: A Poplarville player goes through a hitting drill during a recent practice. Photo by Jonathan Mitchell.

Madison Rester went 1-3 and Ciara Spiers went 1-2 in a game where the Lady Hornets struggled to manufacture any offense.

Lily Tynes took the mound for Poplarville and pitched a complete game while allowing 12 hits, seven runs, one walk and striking out two.

The freshman battled through a hectic second inning where Petal scored six runs and was able to shut down the Lady Panthers for the rest of the game.

“I think she did a great job. The numbers don’t really show it as far as the loss goes, but I’m looking at the positive aspects of the game. She held them off after the second inning, that was pretty big for her. It was a rough inning and there were some defensive errors behind her from the team that just kind of caused a spiral,” Head Coach Janessa Deckwa said.

Poplarville is in the midst of a busy schedule that’ll include matchups against Purvis and Sumrall over the next week.

Deckwa said her players don’t have time to dwell on the loss, and instead must take the lessons learned and focus on the next opponent.

“I try to end with the positives and that’s really important with this group. I can’t expect them to be perfect, but I can expect them to not continue making the same mistakes. I make sure to address the things we need to address and teach them that we have to move on after a loss,” Deckwa said.

The Lady Hornets have had an up and down season and Deckwa said a part of that has been the team’s inability to consistently perform well offensively and defensively in the same game.

If the team struggles in one area it starts to negatively affect other aspects so Deckwa is hoping that stops now with district play in full swing.

“If someone scores a few runs early we have to answer back. I think that’s been a big thing for us is pouting and getting upset, not being able to compete. Just competing for seven innings is what I’ve been pushing hard for them to do. Defense wins ball games. If we’re struggling at the plate we have to play rock solid defense,” Deckwa said.

A positive for Poplarville is that there are plenty of experienced players in the lineup.

Having those veterans serve as a steadying presence when the going gets tough is an asset Deckwa hopes brings benefits as the season progresses.

“I definitely rely on my seniors and juniors a good bit as far as keeping everybody’s heads up and staying confident. All of my seniors have plenty of experience in varsity games and have been there done that. When they’re feeling good and they’re up, it’s a domino effect for the rest of them, but when they’re not up that’s also a domino effect,” Deckwa said.