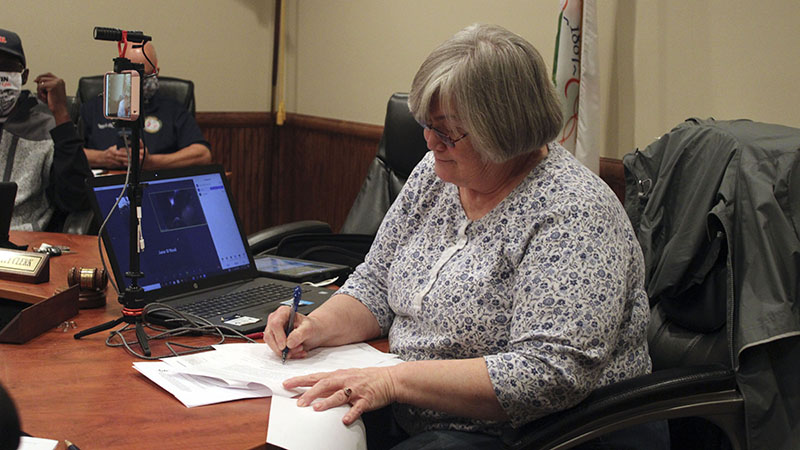 After a year-long process, Poplarville’s city ordinances were codified Tuesday, ensuring the city’s laws are updated and accessible.

Shirley Wiltshire, acting as Mayor pro tempore, signed the adoption of the new city code during a recent Board of Aldermen meeting.

Codifying city ordinances is the process of consolidating the city’s legislation and organizing it in a sequential code of ordinances, said City Clerk Jane O’Neal.

“A code that is well arranged, well-edited, easy to read and up-to-date is a cost-effective management tool for government. It eliminates many unneeded tasks that are a strain on staff members and citizens, and allows staff and citizens to have free, open and ready access to the law,” said O’Neal.

The existing ordinances had not been reviewed in decades, so some ordinances were outdated and needed to be repealed or revised.

Before the codification, not only were some city ordinances obsolete, they also were not available in a single document. Now the ordinances have been bound in volumes and an electronic version has been created to make them more accessible to city employees and members of the public.

For the first time ever, Poplarville residents will be able to view the city ordinances in their entirety online, said O’Neal.

Streamlining the ordinances means that in the future Poplarville’s Board of Aldermen will be able to adopt a fee schedule annually instead of making fee changes to multiple ordinances.

The project took over a year of work from multiple attorneys and city employees. The Board appointed a committee to assist in reviewing city ordinances, said O’Neal. Attorneys from Municode and city prosecutor Clay Cranford reviewed the entire code, checking it for grammar, internal inconsistencies and conformity to state law. City attorney Manya Bryan and city employees assisted in compiling the ordinances.

The code will be available online at the city website poplarvillems.gov or in the Municode library.