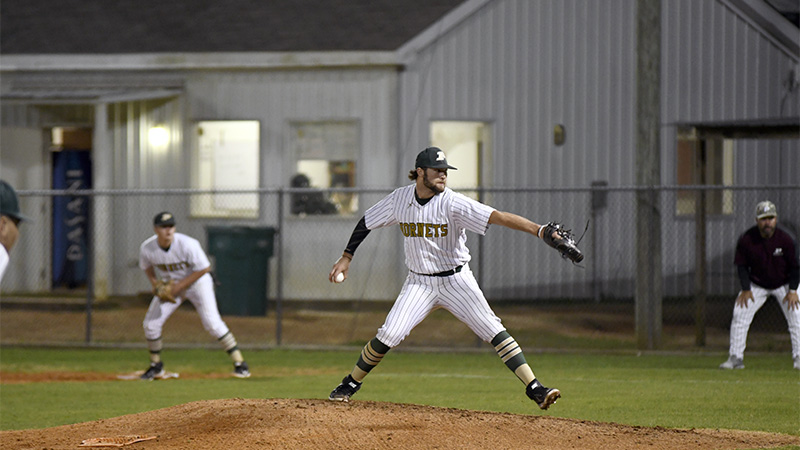 A dominant performance by Poplarville’s Jordan Belsome on the mound was the deciding factor in the Hornets’ 2-0 win over county rival Picayune Thursday evening.

Poplarville scored two runs in the first inning and that was all Belsome needed as he pitched a complete game while striking out 13 Maroon Tide batters.

Tanner Busby got the start for Picayune and went 4 1/3 innings before being replaced by Austin Samples with the bases loaded and only one out.

Samples was able to get out of the jam, but the Maroon Tide couldn’t get anything going against Belsome in the loss.

Picayune Head Coach Evan Nichelson said he was happy with his team’s fight, but that the players’ could’ve been more clinical at the plate.

“We ran into a buzz saw tonight. I thought we played hard. I thought we could’ve competed at the plate a little bit more, but (Belsome) was good. You can’t take anything away from him. I just wanted to see us compete a little better at the plate, but that’s a learning curve,” Nichelson said.

Belsome was dealing all night and said even though he was going up against a county rival, he didn’t let that affect his mindset going into the game.

Poplarville had several situations where runners were in scoring positions and weren’t able to drive them in.

It didn’t matter with Belsome pitching the way he did, but in the future Jones wants to see more out of his players offensively.

“Jordan was dominant on the mound, but one of the things we spoke about was, what if we don’t have the luxury of him being so dominant? We have to be able to change our approach at the plate in certain situations, which our kids know, we’re just not executing it. That’s something we better get figured out and figured out fast,” Jones said.