Poplarville can’t find any runs in loss to Biloxi 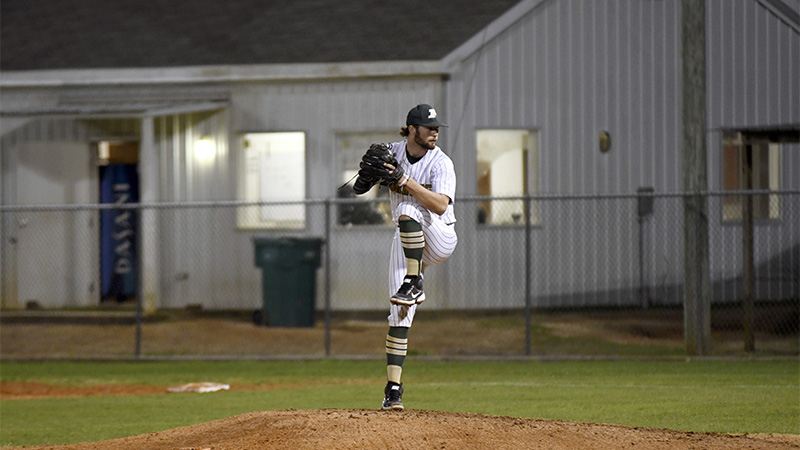 On The Mound: Jordan Belsome winds up to pitch during a recent Poplarville game. Photo by Jonathan Mitchell.

The Poplarville Hornets baseball team took on the Biloxi Indians Monday evening and lost 4-1 in a game where Poplarville had plenty of hits.

Eli Goodwin got the start on the mound and went five innings while striking out eight and allowing five hits.

Joseph Blakeney then came in and pitched the final two innings.

Riley Passman, Quentin Baker, Nate Anderson and Jordan Belsome all had two hits, and Poplarville was able to load the bases multiple times.

However, the Hornets had trouble executing with runners in scoring position. Head Coach Slade Jones said his players need to do a better job of putting the ball in play in those situations.

“We’re doing the right things at the wrong time and the wrong things at the right time. If we can put balls in play, slap some ground balls, we have a much better chance of winning that game. We had some guys out of position, but that’s no excuse. Typically we win those types of games,” Jones said.

There are plenty of upperclassmen on the roster, but because of the early shutdown last year a lot of the older players don’t actually have a significant amount of varsity experience.

Poplarville is 9-2 and was on a five-game win streak prior to the loss to Biloxi, so there’s been plenty of games for some of the inexperienced players to build confidence in the box.

“We do our best to get confidence for those guys early in the year. We’re getting past that now and getting into the heart of the schedule. They just have to be in that situation and get it done to get the confidence part of it,” Jones said.

A loss to a talented Biloxi team isn’t the end of the world for Poplarville since it wasn’t a district game.

Jones said he’ll review the game with his players and go over the positives and negatives from the performance, then move forward.

The Hornets have back-to-back games March 12 and March 13 games against Stone County and Oak Grove respectively, so there’s no time to waste.

“One of the things we say all the time is, what have we done lately? We’ll reflect on last night, then let it go just like we did with the wins. Whether we win or lose, we try to learn from what we did wrong and keep moving,” Jones said.