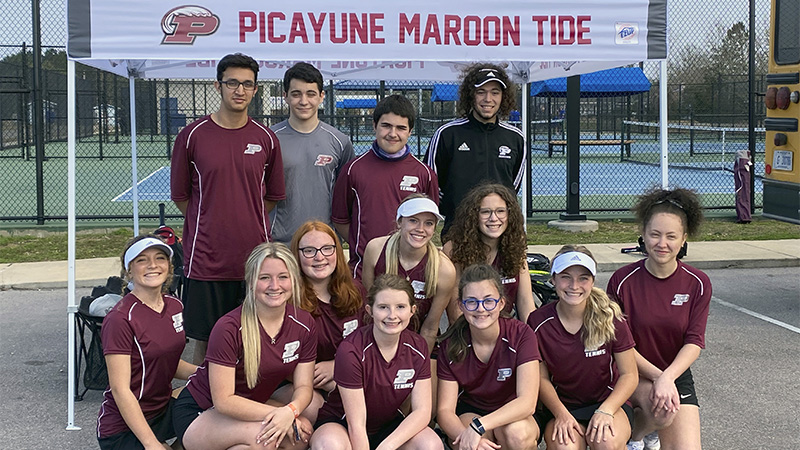 One Team: Picayune's tennis team grabs some shade under a new tent the squad can use for match days. Submitted photo.

The team’s youth didn’t end up being a hindrance as the players went into the matches with one goal in mind and achieved it.

“They did pretty well. We went up there, took care of business and did what we were expected to do. We’ve been working on and talking about having that killer instinct. Just trying to take care of business and get out of there. We improved that intensity and our competitiveness has improved. We’re more focused,” Head Coach Chris Wise said. The team’s success in the singles and doubles matches is an indication of the players’ growth since the start of the season.

Individuals have to learn how to work as a pair efficiently in order to effectively play a doubles match. “That communication, that chemistry between different individuals in different double sets, has gotten better. They’re not only improving their skills and learning how to play the game, but also learning each other’s strengths and weaknesses,” Wise said.

However, developing that chemistry was a tad more difficult this year as an influx of novice players joined the squad.

The athletes were learning how to play tennis from the ground up, but Wise said his veterans stepped in nicely to help the less experienced players improve their game.

“Thankfully the camaraderie, sportsmanship and the kind of nature of my athletes is there. They’re willing to open up to anyone coming on board and they’ve been helpful to new (athletes) coming in. They’re also instructional because my eyes are not everywhere,” Wise said.

When building a player’s skills from scratch, there are certain aspects of the game that just aren’t useful until they’re at a higher level.

“I explained to some of the kids that if they’ve ever been in scouts there’s all those knots they explain and you only really need three. Tennis grips are the same way. You can overthink it and never give yourself a chance to develop naturally into that. You’re too technical and your mind is not in the game like it should be. We’re trying to keep it really simple,” Wise said.

Even though Picayune has reserved a spot in the playoffs, the team can do even better by winning district when the Maroon Tide takes on West Jones on March 25.

Defeating the Mustangs will give the Maroon Tide the number one seed, which means facing an easier opponent to start the playoffs.  “I hope they show up focused and execute everything we’ve been going over. If we’re not distracted we can get the job done. If we show up ready to play there’s some tremendous potential there. The kids that have come out, especially the freshman that have not played before, have really been stepping up and trying really hard. They’ve come a long way in the little time they’ve been playing tennis,” Wise said.