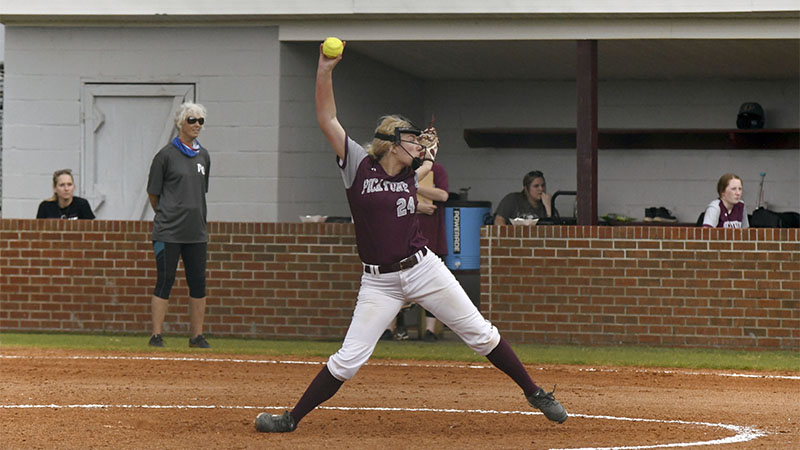 Winding Up: Kylie Burnette prepares to throw a pitch during a recent Lady Maroon Tide game. Photo by Jonathan Mitchell.

Brooklyn Kellar and Sarah Stockstill were Picayune’s main weapons offensively with each player going 2-3 at the plate.

Ryleigh Craft pitched a complete game and finished with two strikeouts and a walk.

The loss was Picayune’s fourth in a row, but little steps are being made each game to get the team where it needs to be.

Head Coach Courtney Dickens has been tutoring her young team on some of the finer details of softball this season, and she saw progress in those areas against Gulfport.

“We’ve been talking about doing the little things that it takes to be successful, the little things good teams do. We didn’t win, but we did do well as far as doing those things I’ve been asking them to do. Our body language was better and our attitude was better,” Dickens said.

The rough start to the season has thrown the team’s youthful squad straight into the fire both in terms of competition and adversity.

Picayune’s youngsters will have to step up, and Dickens is confident they will due to her style of coaching.

“I coach them as if they were seniors because I don’t want to make excuses for them. At the same time, I don’t want them to get complacent, make excuses and not make themselves better. I talk to them all the time about practicing how you want to play. I have high expectations for them, but I know I have to have those expectations for them in order for them to get better,” Dickens said.

Stockstill has been a cornerstone of the Picayune program for years and has been a consistent threat at the plate for the Lady Maroon Tide this season.

Her veteran presence serves the team well given the overall inexperience of the squad and continuing the impressive performances will only increase Picayune’s chances of making the playoffs.

“I think she has the mindset of still wanting to make herself better and still have room for improvement. She works hard for me and does everything I ask her to do. I think she’s very self-disciplined and that’s what makes her a special player. She works hard even when she doesn’t have a coach standing over her,” Dickens said.

Next up for Picayune is a home matchup against Bay High March 18.

The two teams met earlier in the season with Bay pulling out an 8-6 win, so the Lady Maroon Tide will be fighting for a different result this time around.

“If we clean our defense up and hit like we did last time, I think we will beat them. They’re scrappy. They do like to lay some bunts down and do that a good amount, so we have to be ready for small ball. They’re good competition for us and I’m looking forward to playing them to see how we do now,” Dickens said.