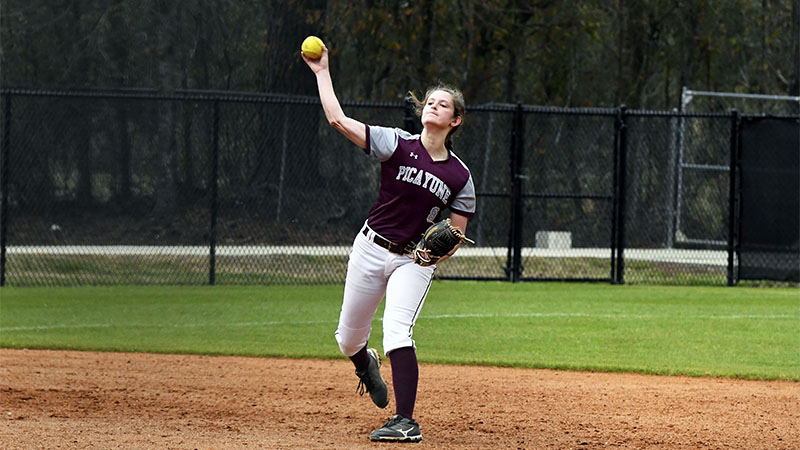 Solid Defense: Sarah Stockstill fields a grounder and fires it to first base during the Lady Maroon Tide's softball game over the weekend. Photo by Jonathan Mitchell.

Picayune’s bats came alive against Pass Christian Saturday afternoon, but it was the Lady Pirates who emerged victorious 9-7.

The two teams met earlier in the season with Picayune winning that game 13-4, so Head Coach Courtney Dickens wasn’t happy that her team didn’t come out with the same energy that led to the previous victory.

“I told them that I did not think that that team was better than us. We beat them 13-4 last weekend because I felt like we were excited and ready to play ball and then today I feel like we just showed up. There was no energy at all, and I was really disappointed in our demeanor and the way we carried ourselves,” Dickens said.

Kylie Burnette got the start for the Lady Maroon Tide on the mound and went the full 7 innings while recording 8 strikeouts.

The junior pitched a good game, but a couple defensive miscues ended up costing Picayune the win.
Dickens said Burnette’s control and demeanor on the mound was a positive for the Lady Maroon Tide during the back and forth game.

“I thought Kylie pitched a good game and I thought she pitched well enough for us to win. To be honest she’s been throwing pretty well all year. I think she does a really good job of keeping her composure,” Dickens said.

Sarah Stockstill led Picayune offensively going 2-4 with two triples and was a major catalyst for the Lady Maroon Tide’s offense against Pass Christian.

However, there were several instances where Picayune had runners in scoring positions but couldn’t bring them home, and Dickens said that’ll be something the team looks to improve on moving forward.

“I don’t have the numbers to scrimmage (during practice), but normally that helps us because we can put runners in scoring position and make them hit them in. Even with me pitching batting practice, I’ll put base runners out there, give them a situation and have them drive those runs in. I know it’s not as game like, but we try to put them in pressure situations in practice so when things like that happen in a game they’re ready for it,” Dickens said.

Picayune’s next game will be against the Poplarville Lady Hornets at Poplarville on March 2.

The county rivals will meet at Poplarville’s facility and Dickens is hoping her team has a better showing against the Lady Hornets than what she saw over the weekend.

“I need more communication and more energy. If they don’t love this game they better pretend like they do because I love this game and I need them to play like that. We just need to show up more ready,” Dickens said.

First pitch is scheduled for 5 p.m.