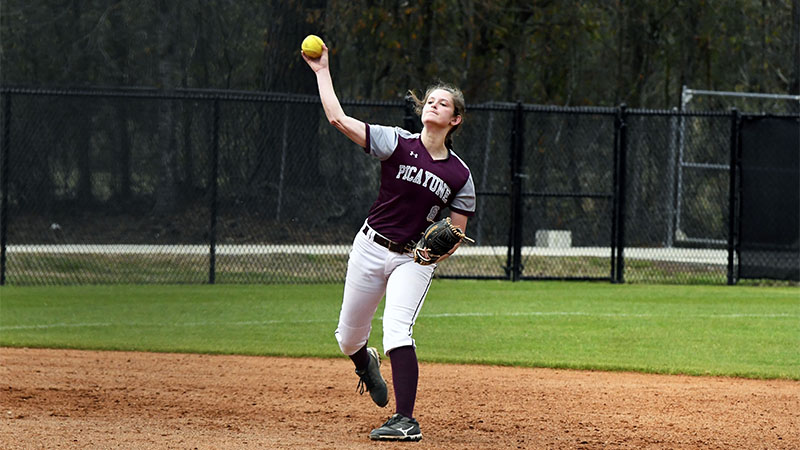 The Picayune Lady Maroon Tide softball team took on the Pass Christian Lady Pirates Saturday and won 10-4 in the third matchup between the two teams this season.

Picayune lost to Pass Christian one week earlier, so the 10-4 victory served as a bit of revenge for Head Coach Courtney Dickens and her team. Kylie Burnette once again dominated on the mound.

The junior struck out seven and only walked four while allowing just two runs. Picayune clicked offensively and had several athletes end the game with multiple hits.

The bounce back performance was exactly what Dickens was hoping for after a subpar showing against Pass Christian the week before.

“I was really proud of them. I hate that it took us losing to realize we have to show up every time. The thing about it is, as much as I hate losing, you do learn a lot from losses. It was just a hard lesson learned. I was glad to get that win,” Dickens said. Even though the Lady Maroon Tide scored 10 runs, the team’s tally could’ve been even higher if the players had been more clinical at the plate.

Dickens said there were several instances where the team had scoring opportunities but didn’t capitalize, which Picayune can’t afford in a district game.

“This game is really mental and when you go up to bat I know with me, when I used to play, you don’t go up there just to put the ball in play. You go up there with the mindset of getting a hit, getting teammates closer to home plate or getting them in. You really have to want to do that. You have to want to be in those pressure situations,” Dickens said.

Now on deck for Picayune is a matchup with the Poplarville Lady Hornets March 11 followed by the team’s first district game of the year against Long Beach the following night.

The Poplarville game will be the team’s last chance to fix any issues before district games start impacting postseason opportunities.

Dickens said her team’s steady improvement throughout the season is positive, but that effort and energy will likely end up being determining factors against district opponents.

“Something I really stress is doing the little things right and what I mean by that is you might not get a hit you want, it might be dribbler to the infield, but I want to see you run as hard as you can to beat that ball out. I want us to do a better job of doing those little things and hopefully that will help us come out with a win against Long Beach on Friday,” Dickens said.