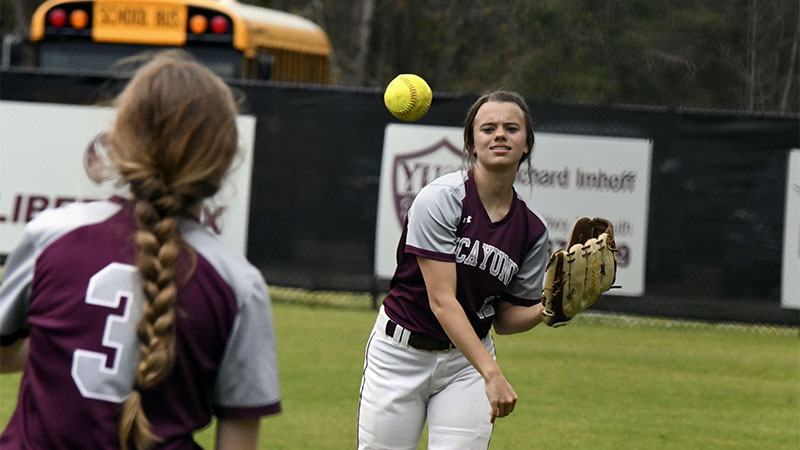 Getting Loose: Freshman Katie Anne Hedgepeth warms up in between innings during a recent Lady Maroon Tide game. Photo by Jonathan Mitchell.

The Picayune Lady Maroon Tide got back on track with a 10-1 win over Bay High last week to end to a four game losing streak.

Kylie Burnette pitched the entire game for Picayune and struck out three batters while only allowing one earned run.

The Lady Maroon Tide got plenty of offense from throughout the lineup against the Lady Tigers with Abby May being one of the standout performers going 2-3 with an RBI and run scored.

May has missed the majority of the season due to injury. Head Coach Courtney Dickens said having her back in the lineup helps bring some stabilization and positivity to the squad.

“I think she adds a lot of spark to our team. She’s a big communicator, especially on defense, and if somebody makes a mistake she’ll pick them up. It’s very important to have people like that on your team. I’ve noticed a difference in our team since she’s been back in our lineup,” Dickens said.

The win was exactly what Picayune needed to get back on track after several successive defeats.

However, things started trending upward after a 5-0 loss to Gulfport that saw the Lady Maroon Tide do all the right things but just not come away with a victory.

Dickens said the positives from the Gulfport matchup helped invigorate the team heading into the Bay High game.

“I thought we played great defense and I thought we hit well too. (Bay High) made some errors, but that’s what happens when you put the ball in play and hit hard, you make the other team make errors,” Dickens said.

Another part of Picayune’s success against Bay High was Burnette’s performance on the mound.

The junior has consistently put in good performances this season, and a big part of that dominance comes down to the work Burnette has put in.

Next up for Picayune is a matchup against West Harrison March 23, but there’s uncertainty whether or not the game will go ahead due to inclement weather that’s forecast to come into the area.

If the game isn’t cancelled, Dickens hopes her players can continue building off the recent games and start gaining some momentum heading into the late season district matchups.

“I want them being more vocal on defense, talking between each pitch and keeping each other in the game. I saw an improvement in those things and I was hoping we wouldn’t get this rain. West Harrison is a good team to play. They hustle on and off the field and they do all those little things right,” Dickens said.