Picayune gets knocked out of playoffs by Forrest Hill 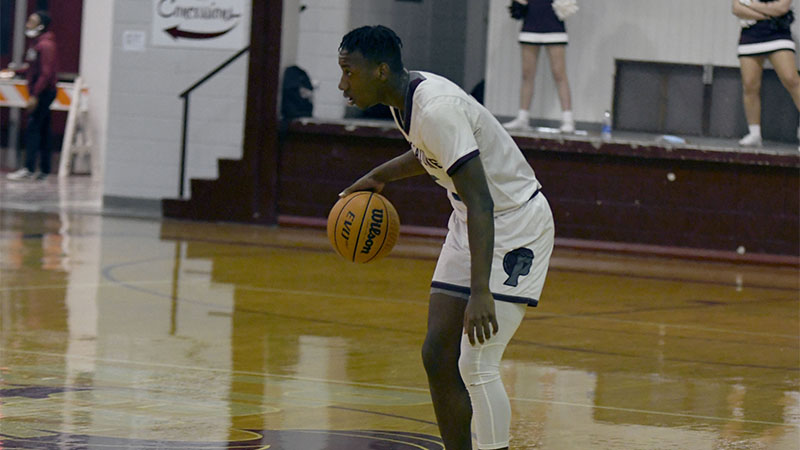 Top Of The Key: Derai Jones dribbles and sizes up his defender during Picayune's playoff victory over Wayne County. Photo by Jonathan Mitchell.

A successful season and deep playoff run finally came to an end for Picayune’s basketball team when the Maroon Tide lost to Forrest Hill 51-39 last Saturday.

Picayune finished the year 20-9 while going 7-1 in district play and winning the district championship.

Following a first round bye, Picayune defeated Wayne County in a hard fought game 55-52 to advance to the Elite 8 where Picayune lost to Forrest Hill in the third round matchup.

Several seniors on the squad contributed to the team’s success, but Head Coach Eric Vianney said plenty of youngsters stepped up in some of the biggest games this season.

“I’m very, very proud of them and as we experienced this moment we have to remember, especially that the last three games since the district tournament, our players that helped carry and make plays for the team were our sophomores and juniors. This experience hurts, but if we don’t forget, we see that opportunity and understand we belong here, then whenever we get back to work we have to be thinking, dreaming and preparing for those types of moments,” Vianney said.

The seniors of the squad, including Derai Jones, Seth Stockstill, John Cook, Anthony Lull, have left a legacy and foundation the new generation of players can build upon.

Vianney said his older players set high expectations and have shown the younger athletes what it takes to be successful.

A mentality shift has occurred as the Maroon Tide developed into a fearsome team capable of taking on any opponent this season, and the younger players will have to carry that mentality into the future as Picayune strives for a shot at a state championship.

“Hopefully the young guys saw what is there, the opportunity and what it takes, and after all that we came up short so that means there’s more to do and it starts with belief. When you work you have to understand why you’re doing it and where you’re trying to go,” Vianney said.

Considering the team’s achievements this year there’s plenty of promise in the future as younger players like Josh Holmes and Isaac Brice keep developing.

Vianney and his athletes know they can’t be happy with this year’s ending, even if it was a successful season.

Picayune wants to bring home a championship, and to do that the team will have to get back on the grind.

“We have something going on and we’re moving in the right direction. We have to stay focused. Our guys see the opportunity and hopefully that experience from going to Jackson and playing that type of team makes them believe we belong here. We want to be here. This is us,” Vianney said.