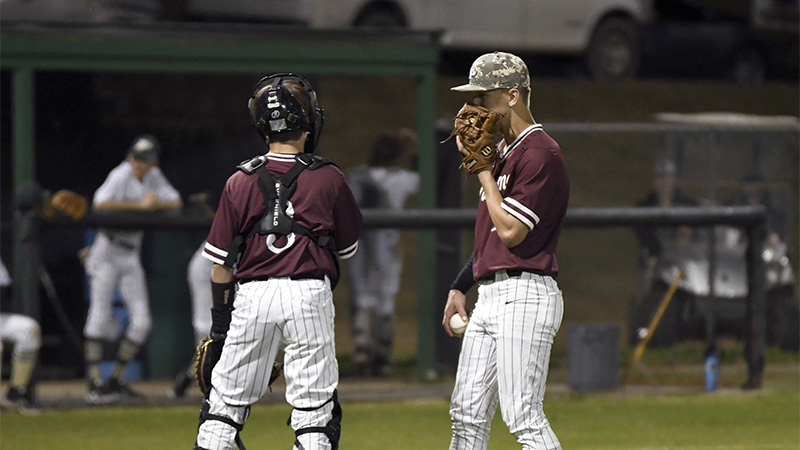 Meeting: A meeting takes place on the mound as Picayune's catcher and pitcher convene to discuss the best pitch to use on a specific batter. Photo by Jonathan Mitchell.

Picayune and Hattiesburg battled earlier this week and the Tigers emerged victorious 13-3 to hand Picayune its first district loss of the season.

Picayune’s main offensive threat against Hattiesburg was Sam Landrum, who went 1-3 with one RBI.

The three runners who scored for the Maroon Tide were Mitch Harper, Morgan Craft and Carson Conner.

Defensive errors and some nerves hurt the Maroon Tide as Hattiesburg was able to take advantage of Picayune’s mistakes.

“I think the other night we were kind of wide-eyed and tried to be perfect. We were trying to do things we’re not able to do.  The moment got kind of big for us at times,” Head Coach Evan Nichelson said.

The Maroon Tide got on base against the Tigers, but wasn’t clinical enough at the plate to take advantage of it.

Several athletes were stranded, which is an offensive aspect Nichelson is hoping his players are able to improve upon with more meaningful games still on the schedule.

“We have to do a better job of bearing down, putting the ball in play and applying pressure. It’s just about getting a little tougher mentally, putting the baseball in play with runners in scoring position and making something happen,” Nichelson said.

Austin Samples ended up pitching 3 2/3 innings in relief against Hattiesburg while only allowing three earned runs and striking out seven.

The senior’s steadying presence on the mound is a weapon Nichelson usually reserves for clutch situations.

“Having Samples there, you know you have a go to and it’s a huge advantage. The goal is to have him on the mound with the game on the line, in a tight game, or up a couple runs. He’s been great for us all year,” Nichelson said.

Incoming inclement weather could end up playing havoc on Picayune’s upcoming schedule, but currently the Maroon Tide’s next district game is scheduled for March 30 against Long Beach.

The Maroon Tide will want to avoid starting district play 0-2, but Nichelson doesn’t see any benefit in having his players worry about the future.

The focus instead is to take it one day at a time in an attempt to have continual progress.

“It’s all about understanding it’s just a baseball game and not getting so wide-eyed under the lights in that type of situation. Just go play the game like you’re capable of, play hard and when the dusts settles we’ll see what happens. We took a step back Monday and now it’s time to take some steps forward,” Nichelson said.