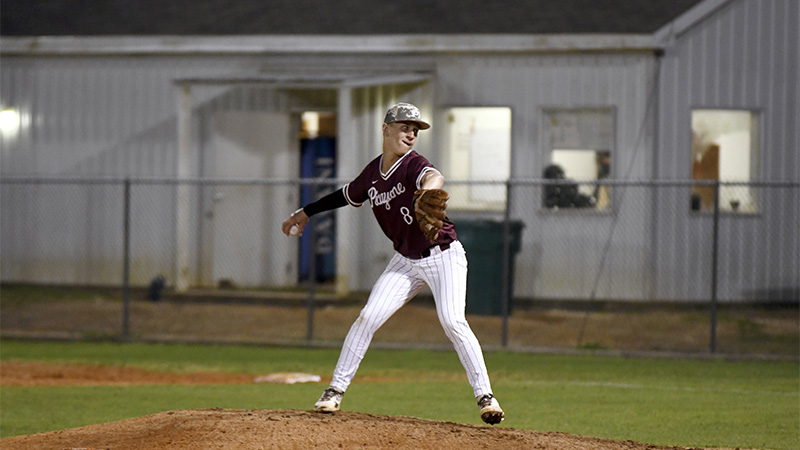 Picayune’s Maroon Tide traveled to Pass Christian Thursday night and lost 11-6 to the Pirates after taking an early 5-1 lead.

Dawson Underwood got the start on the mound and went 4 2/3 innings while only allowing one earned run and striking out two.

However, it was Underwood’s performance at the plate that really stood out as the junior went 4-4 with two doubles, a run scored and two RBIs.

Underwood has been one of Picayune’s most consistent offensive weapons and Head Coach Evan Nichelson is hoping the junior keeps the hits coming.

“He’s probably swinging better than anybody we have right now. He’s grinding out at-bats and finds a way to put the barrel to the ball. Hopefully that continues in district,” Nichelson said.

Picayune’s early lead didn’t end up earning a victory, but the team’s execution during those early innings shows the Maroon Tide’s growth.

“I thought we ran the bases well early, applied some pressure and scrapped some runs across. (However,) we could’ve made some more routine plays. They kind of killed us. We have to get better at making routine plays and eliminating mistakes that give other teams more opportunities,” Nichelson said.

The up and down season has shown the team’s young players that winning varsity level baseball games is no walk in the park.

“From day one we’ve gotten better at settling in. Early on we were kind of wide eyed. Now we’re settling in, playing the game and not trying to do things we can’t do. The goal is to get better every single day and by the end of this thing be sitting better than we are now,” Nichelson said.

The team’s losing record doesn’t necessarily show the team’s improvement, which can be a hard concept to grasp for some of the inexperienced athletes.

Progress is a slow moving process, but one Nichelson’s team is committed to.

“We have great leaders. Our seniors are really taking the bull by the horns and leading these young guys. We harp on it every day. It’s a marathon, but the kids are resilient. They’re taking the lumps better than I am at times. They have energy, play hard and practice hard. As a coach that’s all you can ask for,” Nichelson said.