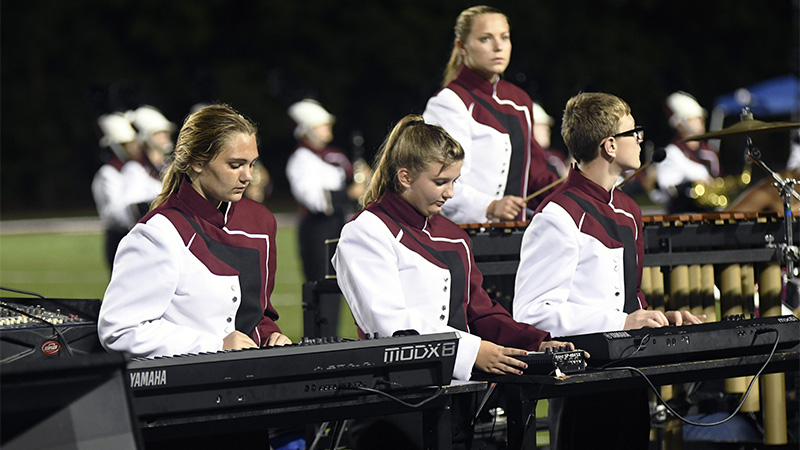 In Concert: Picayune musicians go through their parts during a marching performance. Now in concert season, the venue and type of music the band plays differs. File photo by Jonathan Mitchell.

The Picayune Maroon Tide Band took part in concert evaluations March 2 and earned all superior ratings in what has become the expectation for the band over the past couple of years.

The musicians spent hours learning stage pieces for the performance and were able to spend more time working on those details because there wouldn’t be a sight-reading portion of the evaluation.

However, even though the group could have a more narrow focus, the band’s evaluation took place nearly a month before it usually does, so the time crunch was a challenge for Band Director John Cockrell and his musicians.

A big part of the preparation for the evaluation was having the musicians listen to and understand their individual performances.

Cockrell said he’d record the ensemble playing, which allowed everyone to listen to the performance afterwards and hear what aspects needed to be improved.

Students were also pulled from the ensemble and then listened in on the performance in order to better understand what needed to be fixed.

Cockrell’s goal this year has been to give his musicians as normal of a year as possible.

While COVID-19 made that impossible, getting to take part in concert evaluations, and doing so well in them, helped give the musicians a small sense of normalcy after such a chaotic year.

“I think they were just happy to have something similar to the past back. I know everybody was excited to go. The students have worked very hard and did what we asked them to do, which is a lot. They did really well and I think they’re extremely proud of it, especially after hearing the judges’ comments on tape,” Cockrell said.

The all superior ratings not only served as validation for all the hard working students, but also gave the younger musicians a taste of what it takes to reach that level.

The band’s standards are high, and getting that top tier rating during a pandemic will serve as a lesson for incoming members that the program as a whole requires quality work.

“Our expectation for students are extremely high. When a student enters a program a lot of times they don’t know where that bar is. Sometimes it might be a struggle to meet that bar, but whenever it pays off, like on Tuesday (at the evaluations), all the extra effort and things we did to go above and beyond make sense. I think in the future they’ll remember back that, ‘I had to invest this much time and effort to get to a certain level or a certain rating.’” Cockrell said.

The band will stay busy over the coming months.

April 22 will be the spring concert, which will include performances by the 6th grade band, junior high band, high school band and jazz band.

If attendees are not allowed the performance will be livestreamed.

The junior high band will have a concert evaluation in mid-April and on April 10 the jazz band will perform at 6 p.m. on the Crosby Common’s stage, followed by a performance from the Pearl River Community College jazz band.

If that performance is rained out it will take place April 19.

The band will also have an auto show fundraiser at 800 Fifth Ave. for anyone interested in showing off their unique vehicle on April 17.

There is no admission fee for regular bystanders.

Everyone who registers a vehicle will also get a free t-shirt.

Concessions and vendors will be at the auto show, and if there are any questions contact picayunebandboosters@gmail.com.