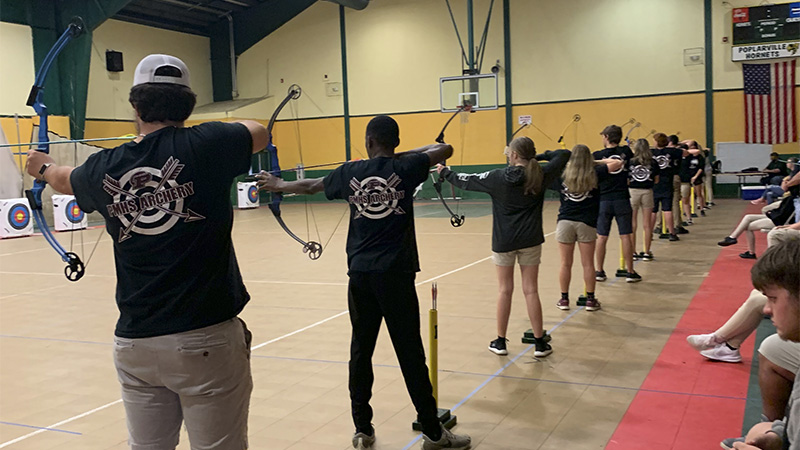 Picayune’s archery team had its best performance of the year at the south state competition Thursday afternoon.

The competition was one of several south state meets taking place across Mississippi this week to determine what teams advance to state.

The Maroon Tide’s collective score was 3,242, the highest of the season, and the score means there’s a real chance the team could qualify for state.

Even with several of the team’s better athletes out, Coach Brian Edwards said the participating archers did a good job of making up for the absences.

“I’m so proud of them. I was just elated. We just stepped up to the plate. Our kids shot lights out. The bottom line is they really stepped up when it counted and that’s what you want out of them,” Edwards said.

Collen Penton and Angelle Hines both shot a 279, the highest scores on the team, while Greg Sandifer shot a 276.

The high individual scores then contributed to the team total that may be high enough for Picayune to qualify for the state competition.

However, that won’t be known until next week.

Some of the other south state competitions across the state had to be delayed due to weather and won’t be shooting until the weekend, so Edwards is expecting to know early next week whether the Maroon Tide advanced or not.

If the team does advance, the routine won’t change for the athletes when they come to practice.

At this point in the season there’s not enough time to fine tune specific techniques or make other large scale adjustments.

Archers will instead focus on getting reps and staying at their current level.

“At this point of the year the practice is about staying in rhythm. That’s the biggest thing they do from here on out. We’re not going to practice longer, harder hours,” Edwards said.

Even if the team doesn’t make state, there’s been plenty of positives this season.

The goal was to have gradual improvement as the season went on, and the scores reflect that progress.

However, Edwards said the team’s camaraderie and chemistry has been one of the best things to come out of this COVID-19 impacted year.

“That was the great thing about this (season). They were so encouraging of each other. I tell them all the time it’s a team sport, and especially with the younger kids we need to keep encouraging them and propping them up, and my veterans did that. They stepped up and coached them along. It’s truly a team effort,” Edwards.