PBA hosts final round of games 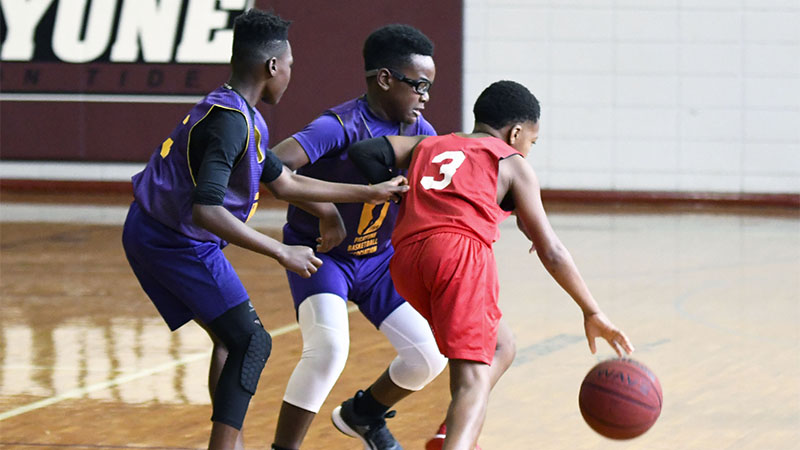 Learning The Game: Young players compete on the court during a recent PBA game. Photo by Jonathan Mitchell.

The Picayune Basketball Association shutdown for the year after the league’s last set of games took place this past Saturday.

The youth basketball league is meant to give youngsters from kindergarten through sixth grade an opportunity to learn the basic concepts of the sport while working on their basketball skills.

The road to the end of the season wasn’t easy given the COVID-19 pandemic, but the league was able to finish its season without a hitch even with all of the trials and tribulations.

“I think it was a success this year. This year coming in I didn’t know if there’d be a big challenge or if the parents would let the kids come out and exercise. We did the best we could and we were fortunate,” PBA Director and Picayune Varsity Basketball Coach Eric Vianney said.

Vianney’s focus, and the goal of the PBA as a whole, is to introduce basketball to young children in the community and teach them how to play.

The passion can then be developed over the years, along with each athlete’s abilities, and can help youngsters fall in love with the sport.

The eight-week season serves as plenty of time for Vianney and his coaches to see improvement on the court.

“I always tell people it’s a beautiful thing to watch the kids over the seven or eight weeks of practice and play. You can see the kids who don’t know much about basketball, but they enjoy being around each other, playing and in the process they learn something,” Vianney said.

The basics of the game are taught repeatedly throughout the season.

In the older age groups, certain concepts and skills are developed as the athletes become more advanced.

Each age group has a different set of objectives when it comes to learning the game, but for Vianney all of that falls beneath the main priority of making the sport enjoyable for the young players.

“You just want to teach them that in basketball you have to learn how to pass, catch, dribble and shoot maybe. It doesn’t matter if you make or miss. We try to do the best we can and for me it’s trying to use this opportunity for them to have fun,” Vianney said.

Vianney has been running the PBA for years and is hoping the organization will continue growing.

The opportunity to teach children about the sport he loves is too good to pass up for Vianney, and now he’s hoping more people who share his passion for the game sign their kids up, or become part of the organization itself.

“For me personally, I don’t care about who wins but I want the kids to experience winning and sometimes you’re not going to win, so you have to value coming to practice and maybe you try to win. I just wish we get some more coaches, more parents or people in the community who want to give back,” Vianney said.