Millage increase to repair roads still on table for Supervisors 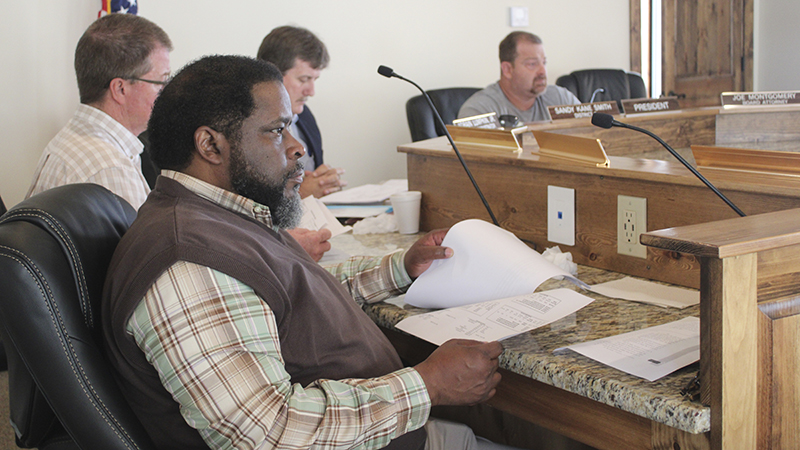 District I Supervisor Donald Hart listens to Les Dungan with Dungan Engineering discuss the potential cost of various types of road materials during a Board meeting Wednesday. Photo by Cathy Cook

The Pearl River County Board of Supervisors met Wednesday to discuss which roads to prioritize in a proposed paving project that would be funded by a proposed millage increase.

Roads should be paved or repaired on a six- to eight-year cycle depending on traffic flow, said Road Manager Charlie Schielder, but many Pearl River County roads are being paved much less frequently due to a lack of funding. When road maintenance is done less frequently, roads that simply needed overlays quickly become roads that need base repairs, which is more expensive and time consuming, said Schielder.

Each supervisor developed a list of roads they feel are a priority for repair. The Board is considering using proposed bond funds to pave an additional 160 miles of road. The initial list of prioritized roads includes 230 miles.

“It’s a hard decision because we’ve got so many roads and so many bad roads,” said District II Supervisor Malcolm Perry.

It is against the law for the Board to simply divide the miles paved equally between districts, said Board President Sandy Kane Smith, so they need to find a different way to determine which roads should be paved.

The Board needs to determine a budget for the project so Les Dungan with Dungan Engineering can move to the next phase of planning.

The roads in District II and District III both get heavy wear and tear from timber loggers, said Dungan. Some roads in the south end of the county support frequent traffic, said County Administrator Adrain Lumpkin.

District III Supervisor Hudson Holliday said the Board could use a combination of miles in a district and population to form the list.

District IV Supervisor Jason Spence suggested letting Dungan and Scheilder narrow down the list, as they will have a better knowledge of road needs.

The Board entered executive session to discuss personnel matters.

The next Board meeting is scheduled for Wednesday, March 17 at 9 a.m.