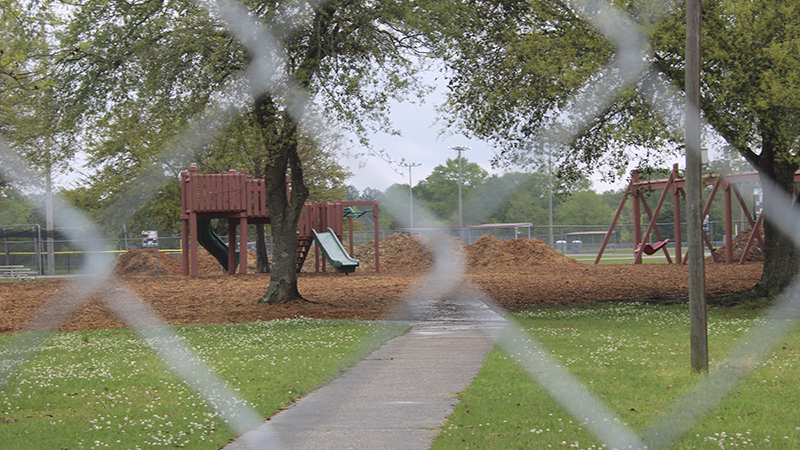 all that remains: A recent demolition of Kids Kingdom at Friendship Park in Picayune has left only this slide and two swing sets. Cathy Cook | Picayune Item

State funding may be headed to Picayune for improvements to Friendship Park, capital improvements at the police department building and safety and drainage improvements on Highway 43 North.

The funding would be provided as part of three different bills.

The city of Picayune submitted applications for three projects for BP settlement funding, according to previous coverage. One of those applications was approved: $1.9 million to revitalize Friendship Park. BP projects need to demonstrate an economic impact, said State

Representative Stacey Wilkes, and the park project will do that by allowing the city to host more baseball and softball tournaments. The project will include redoing the turf on the fields and rebuild playground equipment that had to be demolished due to rot. Wilkes said hosting more ball tournaments should bring in revenue for businesses, hotels and restaurants.

“If you look at Friendship Park, it’s very obvious that we need to do this. Probably more people use this than just about anybthing else in our town other than just driving down roads,” said State Senator Angela Hill.

Legislators also included $500,000 in a Department of Finance and Administration bill for the renovation of the Picayune Police Department facility. Hill said there were one time funds available for capital projects and the police department fit the criteria for capital expense funds that would be distributed for projects across the state. The city will administer those funds through the Department of Finance and Administration, said Hill.

Picayune Police Chief Freddy Drennan said he is not sure yet how exactly the funding will be used or what the limitations are on spending the funds since information about the extra funds just came out.

A bill for Mississippi Department of Transportation funding also includes $500,000 in funding to address drainage and safety concerns on Highway 43 North in Picayune.
Hill said there is a significant problem with flooding near the Highway 43 bridge, which is a serious safety concern. She believes the six box culverts on either side of Highway 43 are not enough to allow water to flow through, so it ends up on the highway during extreme flooding events. There are also concerns about traffic accidents on Highway 43 during pick up and drop off times at Heritage Christian Academy, said Hill.

Hill said she’s talked to MDOT in the past about making the area safer, and they suggested flashing yellow caution lights, but could not fund the project. Now, they will have funding to make the intersection safer. Hill said she believes it is unlikely a red light would ever be placed in the area because of the proximity to the Highway 11 red light and the hill created by the overpass.

She believes the funds will allow MDOT to make the intersection safer and start to address the drainage issue. The MDOT funding is coming from the state’s general funds, said Hill.
The funding for all three projects could potentially be released in September or October, said Hill, as it takes a while for funds to be released.

“We had a very good day yesterday,” she said. “All our legislators worked together to secure these funds. It was a collaborative effort between all of us.”