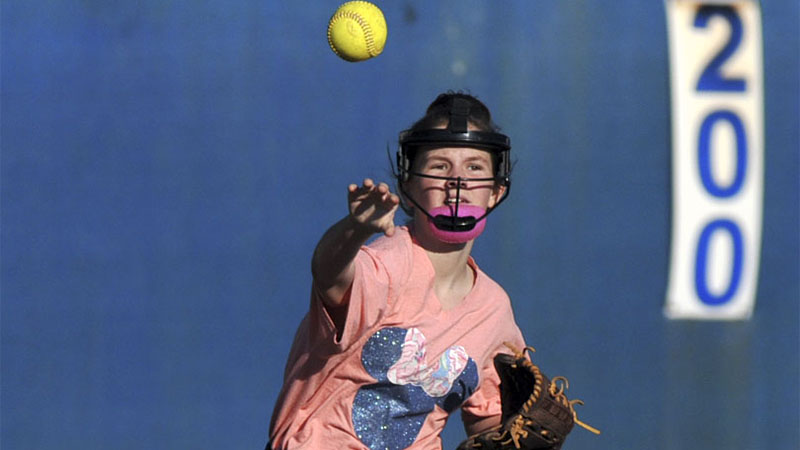 Working It Out: Baylee DeVore tosses a ball back towards the infield during a PRC softball practice. File photo by Jonathan Mitchell.

PRC couldn’t get anything going offensively and a couple defensive errors contributed to the rough outing.

Now the Lady Blue Devils will look to clean some things up and earn a different result when the team takes on the Hattiesburg Lady Tigers March 4 for PRC’s first district game of the year.

“They’ve always been a team that’s had some hitters that are good in one or two areas, and they’ve given us problems in the past. I know we beat them last year, but this year with people playing a limited amount of games so far it’s a toss up,” Head Coach Tony Labella said.

The game is just one of six that’ll determine PRC’s postseason fate.

Playing such a limited number of district games means there’s little room for error, even though the season has only just begun.

“You only have six district games so you can’t say, ‘Oh it’s just a bad one.’ We don’t have Long Beach and Picayune until the end of the season and we want to get to those games and still have a shot to do something in district,” Labella said.

There’s also a greater emphasis on performing well during these early season district games because of the ongoing COVID-19 pandemic.

Athletes could be in and out of the lineup due to quarantine restrictions, which means there could be instances of PRC having to play a district game while not at full strength.

Labella said the circumstances require a good start to district play in order to lessen the pressure of future games if there are starters out.

“Because of the state of things with COVID-19 and the possibility of getting sick you don’t know if you’ll have your whole team for any game down the line either, so when you have everybody together you better play well because who knows who’s out in three weeks. We have to take care of business now when we can so the ones later will mean something,” Labella said.

Women’s Basketball Slotted at No. 24 in AP Poll