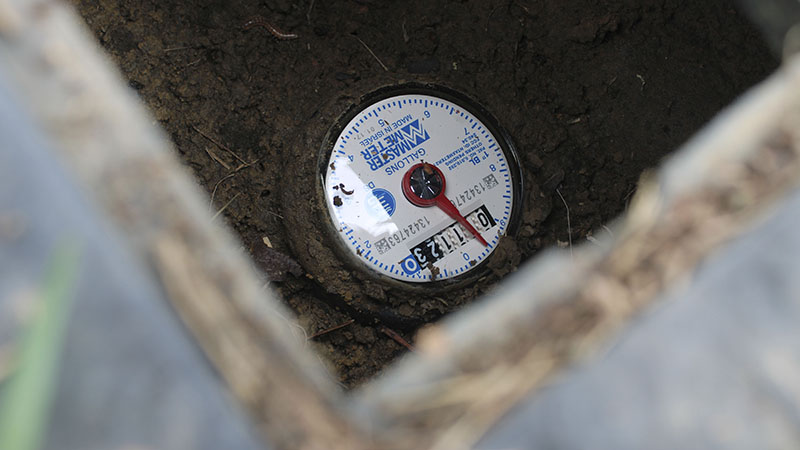 keeping tabs: Water meters help city and water service personnel keep track of usage at a home or business. But one Poplarville man faced a high water bill when alleged mischief resulted in an outside spigot being left on for a month. Cathy Cook | Picayune Item

Within three hours of the situation being announced, the Poplarville community raised over $1,000 to help an older resident pay for an exorbitant water bill he incurred after an outdoor spigot was left on for over a month.

Poplarville resident Carl Struck, who is in his 90s, came before Poplarville’s Board of Aldermen Tuesday to ask for their help. He received an exceptionally high water bill, over $1,000, after an outdoor spigot on his house was left running for a month.

His typical water bill is close to $70. He told the Board he does not know who has been leaving the outdoor faucet running, but made it clear he planned to take responsibility for the bill and make sure it was paid.

The Board unanimously agreed to let him repay the bill via a payment plan. Legally they were not allowed to adjust the bill or waive the late fees associated, said City Attorney Manya Bryan. Bryan recommended that if he finds out who is leaving the water on, he call the police.

The faucet being left on appears to be an ongoing problem, as public works department staff members found it running again on Tuesday immediately before the Board meeting.

The Board members recommended he get a locking spigot to prevent future high bills and asked him to inform them if they could offer additional assistance.
Struck told the Board he appreciated their work.

Poplarville resident Mary Tidwell was watching the Board meeting’s live stream at home, and Struck reminded her of her grandmother, who is a similar age, so Tidwell and her husband Josh Tidwell decided to set up a Facebook fundraiser to cover the cost of the bill.

The Tidwell’s have never met Struck, but were moved by his presentation in the Board meeting. To Josh Tidwell he seemed like a man who “worked hard his entire life.”

Within three hours, the Facebook fundraiser raised over $1,600, along with a few private donations from people who did not want to donate through Facebook.

“I was pretty confident that we would be able to meet the goal within probably the two week time period Facebook normally does. If not, I figured we would get pretty close to it and at least take some of the burden off of Mr. Struck, but I was extraordinarily amazed that we were able to pull in enough funds within three hours to exceed the money needed to take care of it.”

Facebook fundraisers take a 2.8 to 2.9 percent fee, said Tidwell. The remainder will go toward the water bills. Another community member who wished to remain anonymous was able to get a plumber to commit to installing padlocking spigots on the outside of the house for free, said Tidwell.