Board of Aldermen hear about park construction, church fire update 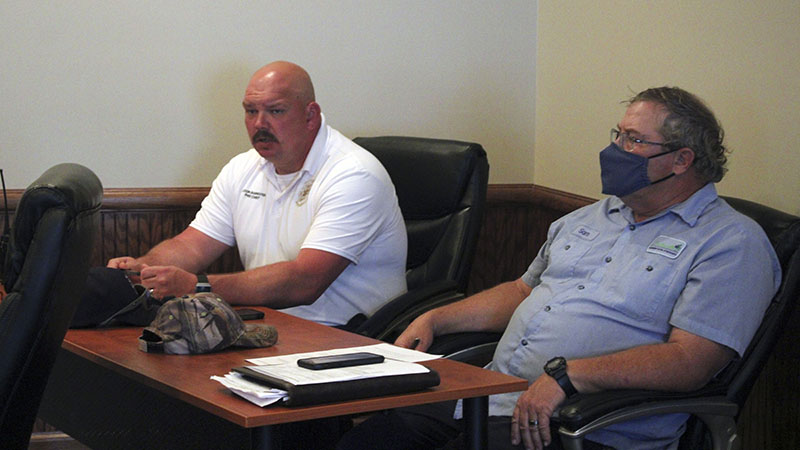 Quick Response: Poplarville Fire Chief Jason Bannister updates the Board of Aldermen on the church fire that occurred in Poplarville on Sunday. Cathy Cook

Work to construct the stage and bathrooms in Poplarville’s City Square Park is behind schedule due to wet and cold weather.

The construction is supposed to be complete by April 15 but the contractor might need an extension, Poplarville Mayor Rossie Creel said.

Poplarville’s Board of Aldermen approved a cash request of $19,032 for work on the stage during their regular Board meeting. The project is being funded by a grant from the Mississippi Development Authority.

Fire Chief Jason Bannister gave the Board an update on the fire that occurred at First United Pentecostal Church Sunday.

The department was dispatched at 10:22 Sunday morning and had a five minute response time, said Bannister. The fire was through the roof of the building when the firefighters arrived. It took 41 minutes to get the fire under control, said Bannister, and firefighters were there five hours and 30 minutes putting out hot spots.

Other fire departments, including numerous volunteer firefighters, the Poplarville Police Department, the Sheriff’s Department and numerous civilian volunteers showed up to help, said Bannister. Churches and businesses also donated food and drinks for the volunteers.

There were no injuries due to the fire, although some fire fighters did suffer from heat exhaustion.

But the city did not suffer any water issues despite the water used, which Bannister said is a credit to the public works department.

There is still a fire underneath a big pile of debris six to eight feet deep in the middle of the building, said Bannister, which is too risky to put out, but the fire department is monitoring and managing it.

“We don’t have enough water in the county to put the fire underneath it out,” said Bannister.

However, firefighters are coming back to the site throughout the day to put out small hot spots.

Several Board members and the mayor said they have been told that so many other fire departments responded so quickly because Bannister has good working relationships and communication with those departments.

“The reason they were here as quick as they were was his leadership and his communication,” said Alderman Russell Miller.

“We really appreciate that leadership.”

The fire is being investigated by the state fire marshal’s office, an investigation which will take at least 45 days to complete, said Bannister.

—Approved promoting Michael McClantoc to captain in the Poplarville Police Department. The department will need to hire a new officer to fill McClantoc’s previous position.

—Approved allowing a Poplarville resident to use a payment plan to pay the exceptionally high water bill he received after a spigot on the outside of his house was left running for a month. The bill is estimated to be approximately $1,000. The 90-year-old resident, Carl Struck, does not know who has been leaving the outdoor faucet running, but it appears to be an ongoing problem since the faucet was running again Tuesday. Board Attorney Manya Bryan informed Struck that if he finds out who is leaving his water running to call the police because it is a crime to run his water and run up the water bill. Legally the Board was not allowed to waive late fees or reduce the bill.

—Addressed a resident’s concerns about North Hughes Street. The Public Works Department has a temporary solution to fix a spot that is caving in and the street is high on the list of prioritized streets for paving, so will be included in the city’s next paving project.

The next Board meeting will be Tuesday, April 6, at 5 p.m.