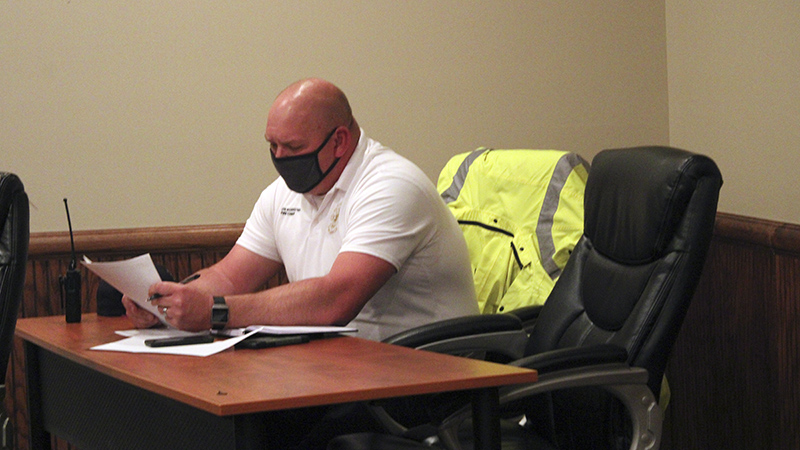 Poplarville Fire Chief Jason Bannister asks the Board to add four volunteer firefighters to the roster.

The Poplarville Fire Department’s training truck will finally be getting needed repairs after it was hit by a driver in November.

The truck was hit while parked in front of the fire station, according to previous coverage.

The driver who hit the fire department vehicle had no insurance and the city’s insurance only paid $354. A warrant was issued for malicious mischief against the driver, who lives in Hattiesburg, said Police Chief Danny Collier. Officers with the local police department are getting help from law enforcement there to try and serve the warrant. If convicted the driver will be responsible for reimbursing the city for the damage.

The Board approved repairing the damage to the door and fender and getting the entire truck painted for $3,215. There is enough money in the fire department’s budget to cover the cost of the repair, said City Clerk Jane O’Neal.

Smith said the Sheriff’s Department is open to helping Poplarville clean up litter by using the labor of county inmates who are already on a litter crew.

Smith asked if municipal judges could give people community service to clean up litter but city attorney Manya Bryan said the city’s Board cannot tell judges what to do with sentencing.

Alderman Daniel Brown asked if the city’s littering fine could be increased.

—Approved waiving the event fee and insurance requirement for an event in City Park on March 20 where mayoral candidates will answer questions about their platforms.

The next Board meeting will be Tuesday March 16, at 5 p.m. in Poplarville’s City Hall.