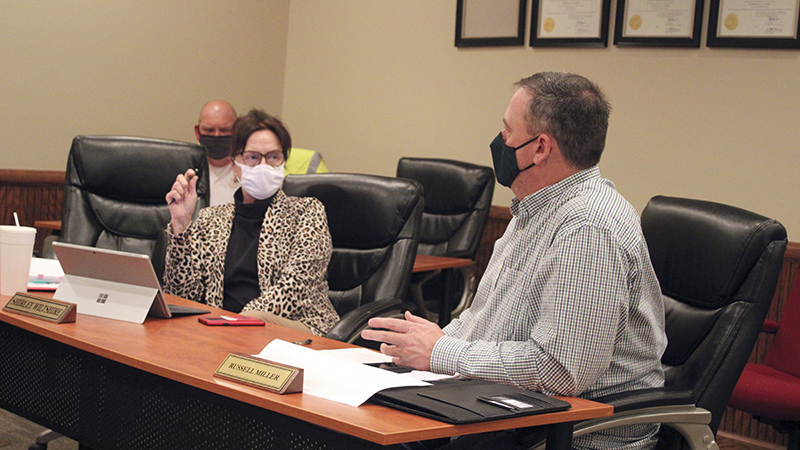 Board member Russell Miller asks about the city’s insurance policies during a discussion about a damaged fire department vehicle. Photo by Cathy Cook

During Tuesday’s meeting of the Board of Aldermen, which entailed some Internet connection issues causing communication issues between those attending physically and virtually, street repairs along West North Street were discussed.

The Board is looking at how to address damage and needed repairs on West North Street. The Board approved engaging Jason Lamb with The Walker Associates to determine the scope of work and cost of a project to repair the damage near 404 West North Street,

Repairing the damage on West North Street could include reconstructing the curb and doing a significant overlay, said Lamb, but the city could also address the damage on the street in gradual phases or just address the sidewalk. Lamb said the sidewalk there needs to be repaired as it is hazardous to pedestrians.

Just repairing the sidewalk could cost the city about $22,000, Lamb estimated, while doing all the needed repairs might require more than $80,000. The city has approximately $79,000 in a fund designated to repair streets and bridges from Internet sales taxes that could be used to help cover the cost.

The Board also approved engaging Lamb to examine what may be obstructing drainage from a private property at 411 West North Street into the public right of way.

The property at 411 West North Street belongs to Alderwoman Anne Smith. Smith attempted to explain the drainage issues going on with the property. Mayor Pro Tempore Shirley Wiltshire reminded Smith she needed to recuse herself from the meeting while they discussed an issue involving her property. Smith then recused herself.

The next Board meeting will be Tuesday, March 16 at 5 p.m. in Poplarville’s City Hall.