A year with COVID-19: the lost season 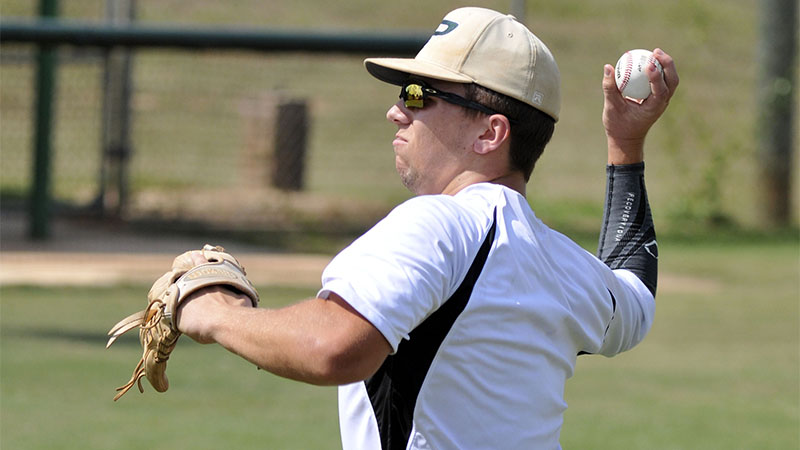 Cut Short: Brady Tynes throws the ball back to third base during a Poplarville baseball practice last year. Tynes was one of the seniors affected by last season’s early cancellation. File photo by Jonathan Mitchell.

As COVID-19 tightened its grip on the United States and the world in general, sports came to a halt in Mississippi when the Mississippi Activities Association made the difficult decision to suspend and then cancel 2020 spring sports.

Several local programs were in the midst of their schedules when the announcement came down.

The gut reaction from coaches, athletes and fans alike ranged from shock to frustration to sadness.

Poplarville Baseball Coach Slade Jones said he at first couldn’t come to terms with the fact that his team’s 2020 season was over before it had really truly begun.

“Thinking back I really was just in disbelief. It was one of those things where you hear it and have trouble believing it, and then it takes two or three weeks before it hits you. None of us had experienced something like that and may never experience something like that again. It was a hurdle, but such is life,” Jones said.

Pearl River Central’s softball season was just getting underway as well when the MHSAA’s decision came down.

Seniors made up a good portion of the Lady Blue Devils’ roster, and Head Coach Tony Labella said those players kept hoping the season would restart, but it never did.

“At one point you just knew it wasn’t going to happen. It was so sad because the seniors were latching onto any final hope. It was tough because you didn’t want to say definitely not (about the season coming back), but you also didn’t want to get their hopes up because it didn’t look good. They took it very hard,” Labella said.

Chris Wise is the head coach of Picayune’s tennis program, and his athletes were just starting to come into their own when the season was called off.

Several of the team’s younger players had been spending time perfecting their skills in competitive matches, but all that work went out the window.

For the athletes who then returned after the cancelled season, the lost experiences and time with their senior teammates has led to a different kind of mindset this season.

“I’m constantly reminded of sports being much more than just the competition. Their development as a person is important. The social aspect they appreciate much more (now). The kids that I have are a pretty tight knit family and enjoy being around each other. I think they’re really appreciating each moment more,” Wise said.

Courtney Dickens’ softball program at Picayune used the cancelled season as a source of inspiration and work ethic when encouraging younger athletes in 2021.

“We’ve been stressing this all year, but when you do get an opportunity you have to go all out because you never know when stuff like this happens. Who would’ve ever thought a pandemic would happen and that would be the reason why (the season ended)? You think about injuries that keep kids from playing, but nobody ever thought about a pandemic,” Dickens said.

Case numbers are going down and the widespread introduction of vaccines has people hoping for the end of the pandemic.

The long-term effects on local sports programs are still to be determined, but Wise said there is one thing he thinks will persist into the future as humanity fights to overcome COVID-19.

“I think people are tremendously resilient and are coming back to a sense of normalcy. I think the lingering effect is the appreciation of what we have, the time together and the opportunities we have, that we just to need to take advantage of that and have the full use of it. That’s what I see out of the kids I have is that every opportunity they have they appreciate more,” Wise said.