A year with COVID-19: planning the restart 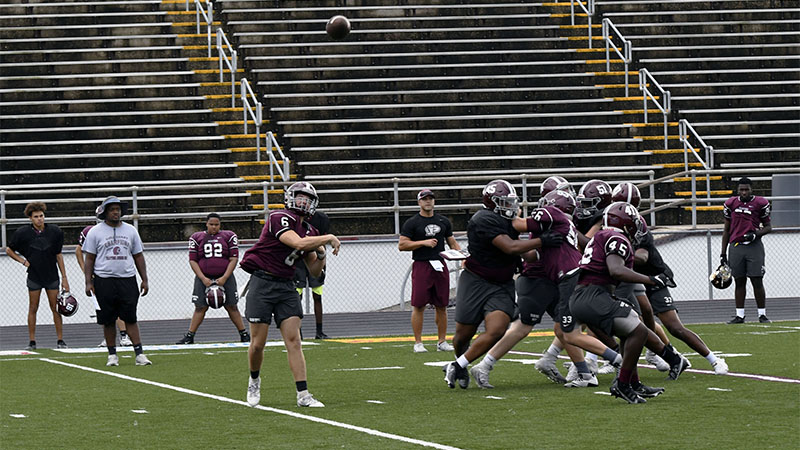 Back In Action: Football was one of the many sports that resumed practices in the summer following the restart of athletic activities in Mississippi. File photo by Jonathan Mitchell.

It’s been over a year since the Mississippi High School Activities Association made the decision to suspend athletic activities and a lot has changed in that time.

The MHSAA’s announcement wasn’t a shock, but it did send a clear message to school districts that the organization was taking COVID-19 seriously and at that point, the negatives outweighed the positives when it came to continuing athletic competition.

Following the suspension of play the MHSAA then outright cancelled sports last spring, causing programs across the state to shut down and preventing seniors from having the usual sendoff of a normal season.

However, a couple of months later athletes were allowed to return to their programs over the summer, albeit with a litany of restrictions and guidelines.

Athletic directors across the county were sent scrambling to get everything set up in time for players to return and it wasn’t an easy process.

“We met with our staff and we talked about what the MHSAA was going to require from us to participate and started discussing things we had to make sure we had covered prior to us even starting practice. There were a lot of questions, a lot of answers, a lot of discussion and it was intense,” Pearl River Central Athletic Director Chris Teal said.

Athletes then got back to the grind in the summer of 2020 prior to the start of competition in the fall.

Once competition restarted, the process of putting on a season became even more complex.

Teams had to travel, follow COVID-19 guidelines, there were stadium and gym capacity limits and programs had to deal with the influx of fans and players from outside the community any time there was a game.

Picayune Athletic Director Adam Feeley said there was constant discussion between all athletic directors to make sure incoming fans and players knew what guidelines were in place.

“It took a lot of communication between myself and the other AD of the team we were competing against making sure we understood what each one was doing and making sure we were on the same page. Things like how to buy tickets, where to position people, how to enter and exit the stadium, how many people could be there and then to communicate that information to the public,” Feeley said.

Not only was there stress on the administration and athletic directors, but the coaches also had plenty of extra responsibilities put on their plate because of the pandemic.

Poplarville Athletic Director Jay Beech said the possibility of losing a player to quarantine, or having to shut down the program as a whole because of case numbers, was a constant worry during the season.

“It added a lot of extra stress. You put together a game plan for your next opponent and feel good about it and are excited to get working on it, then you show up to school Monday and the worry and stress creeps in if you’ll even have players; if you’ll have to quarantine or shut down. The stress of COVID-19 put a big burden on coaches,” Beech said.

However, community support, along with the willingness of community members to follow guidelines, has allowed sports to continue flourishing in Pearl River County since the restart.

Citizens across the county stepped up and lent a financial hand to the local athletic programs.

“The public has been great fundraising for our sports. They’ve stepped up big time, especially for the small sports that have been in need,” Feeley said.

The recovery and restart of sports in Mississippi has been an ongoing process, but so far the local programs have been able to enjoy competitive matches once again.

“In Carriere that’s an important part of yearly life, to follow our kids, and when that got shut down it was very difficult. That was the toughest part,” Teal said.

“We live in a sports driven community. It really put a hit on the seniors that were leaving, but the ones we had coming back really bought into everything we had going on and wanted to have a sports season. We were going to do what ever it took for that happen,” Feeley said.