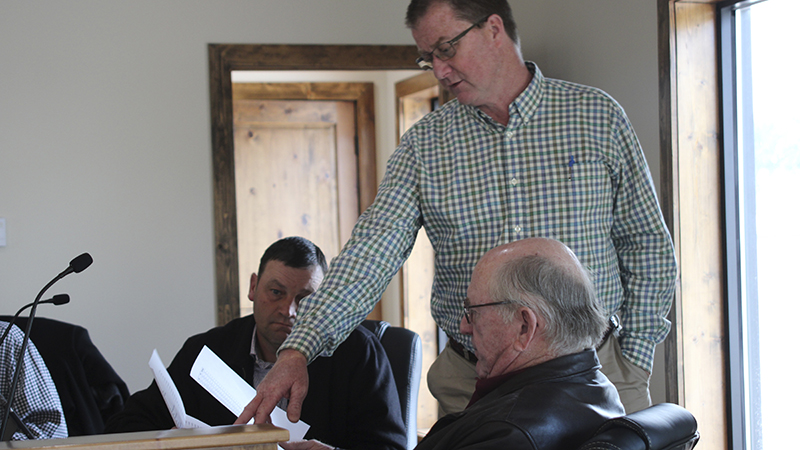 District IV Supervisor Jason Spence, District II Supervisor Malcolm Perry and District V Supervisor Hudson Holliday compare lists of roads in their districts that are in need of repair. The Board will have a road workshop next week to discuss funding and priorities for road repairs.

Some Pearl River County Supervisors believe the permit fee to build a home in the county should be reduced.

During the Board’s regular meeting Wednesday, District V Supervisor Hudson Holliday said he is concerned about the price of permits required to build a home and wants to see if the cost could be reduced.

Discussion of the matter came about while the Board was approving a request to reimburse a permit fee to a couple who decided not to build a home. Holliday said he believes that $900 is too much for a permit fee. The permit fee varies depending on the building’s square footage.

Holliday asked what citizens get for those fees, and Lumpkin said the county reviews home plans, makes suggestions and checks to see if the home is being built in a flood zone.

Recently, the county has been collecting around $27,000 per month in the fees because of a boom in home building, but there were months when the county collected less than $8,000. The fees cover the cost of three county employees and two vehicles.

District II Supervisor Malcolm Perry said he is for saving people money, but the Board would need to come up with a new way to fund the permitting work that has to be done.

The Board also discussed the road damage being caused by fiber optic cable installation in subdivisions.

Road Manager Charlie Schielder said he believes the damage is being caused when the contractors do not bore deep enough under the road. Schielder said that the permits required to put in fiber optic require it to be installed six to eight feet beneath the soil, which should avoid causing issues. However, installers are not always getting the required permit before doing the work. Schielder said the issue needs to be addressed and that contractors tearing up the roads should be billed for the repair.

—Acknowledged Household Hazardous Waste Day, which is set for March 20 at the Pearl River County Road Department Office in Millard. Hazardous materials will begin being collected at 8 a.m. and last until the grant funds are exhausted.

—Approved the inmate health services agreement with Health Corr, LLC. The original agreement began in Jan. 2018, and is being extended three years.

—Acknowledged orders from the Chancery Court to appoint Scott Hillery special lunacy prosecutor and to pay Jansen Owen to defend respondents in lunacy proceedings, both until the end of September. Hillery was special defender previously. The Board also approved Hillery’s appointment as public defender for the Youth Court.

The next regular Board meeting will be Monday, March 1 at 9 a.m. The Board is also planning another road workshop on Wednesday, Feb. 24.