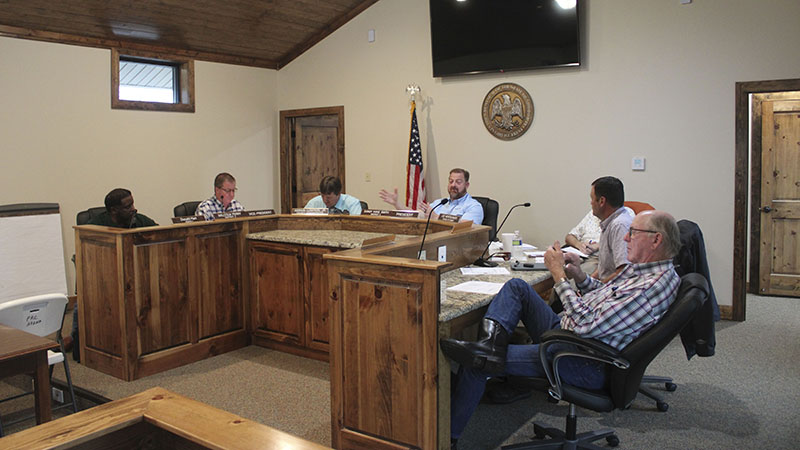 Pearl River County’s Board of Supervisors is considering a millage increase to help fund a bond that will be used to conduct countywide road repairs. Cathy Cook | Picayune Item

The Pearl River County Board of Supervisors is considering a tax increase to pave roads in desperate need of maintenance.

To keep up with annual road maintenance and ensure county roads are in good condition, the county would need to pave roughly 60 miles per year, said Road Manager Charlie Schielder. With the Road Department’s current budget and staffing, the department paves an average of 20 miles per year.

According to Schielder, the longer a road problem goes unaddressed, the more expensive it becomes to fix as cracks turn into potholes. This creates a cycle, where more and more county roads require more time and money to be repaired.

If the county does not pick up the pace of paving roads, it could end up having to revert some paved roads back to gravel, said Les Dungan with Dungan Engineering.

In a meeting concerning road maintenance held Thursday, the Board of Supervisors discussed the possibility of raising ad valorem taxes. The proposed raise could double the amount of roads paved in the county over the next 10 years from approximately 200 miles to 400 miles.

County Administrator Adrain Lumpkin, said the county has a window of opportunity to make significant progress on addressing county roads because interest rates are at a historic low, making it a good time for the county to borrow money.

“I understand that when people hear we’re going to increase taxes, everybody just panics,” said Lumpkin. “If the Board decides to do this, to me it’s an easy justification, because it’s a dedicated millage that’s put on to satisfy a bond for road and bridge work. You can’t take this millage and do anything else with it. Once this debt comes off, this millage comes off.”

To give the supervisors perspective on how those potential tax increases could affect taxpayers, Lumpkin calculated how much each of the supervisors would pay. For 3 mills, the Board members would personally pay between $341 and $1,061 over the course of 10 years.

If the county went forward with a bond, the road work it funded would probably be completed within the first three years, while the note would take a total of 10 years to pay off.

The Board members discussed focusing the county’s Road Department on base work and preparing roads for overlays, then contracting out overlay work. In theory, this would reduce the amount of new equipment the county would have to acquire to complete so much additional roadwork.

By the end of the meeting, the Board had “a plan to make a plan,” said District IV Supervisor Jason Spence.