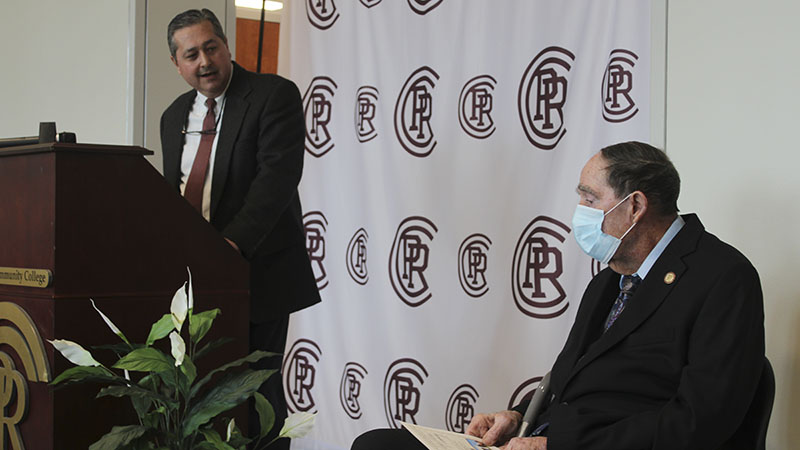 PRCC Board of Trustees member Tony Waits tells Dr. James Barnes that his work as an educator has made a difference during a dedication ceremony for the James W. Barnes STEM Center at PRCC’s Poplarville Campus. Barnes was Waits’s academic advisor during his time at the college. Photo by Cathy Cook

Barnes is a PRCC alum who was a science instructor there from 1962 to 1999. He also served on Poplarville’s Board of Aldermen and was elected mayor in 1985.

“This is a man who understood the best way to find yourself is to lose yourself in the service of others,” said PRCC President Dr. Adam Breerwood.

During his time at PRCC, Barnes served as chairman of the science department and in 1971 was selected as an outstanding educator of America.

At the dedication Barnes shared some humorous stories from his time teaching and during his time as mayor. Much of his own family are PRCC graduates, he said, and he often sees former students.

“Everywhere we go we run into former students, and I think the success they’ve had is a testament to this college.”

PRCC Board of Trustees member Tony Waits said Barnes was his advisor during his own time at PRCC studying pre-pharmacy.

“He was a caring person who sought to teach students and meet students where they were at,” said Waits.

Ground was broken on the STEM Center in 2019 and it was completed in August 2020. State bond money funded the almost $6 million project.

According to a release from PRCC, the project entailed renovation work to the campus’ existing science and math building that installed LED lighting along with new ceilings, doors and an elevator to allow access to the second floor.
The project also included the construction of an 11,000 square foot annex that includes labs for chemistry, organic chemistry, anatomy and physiology and microbiology classes.