PRC soccer gets knocked out of playoffs 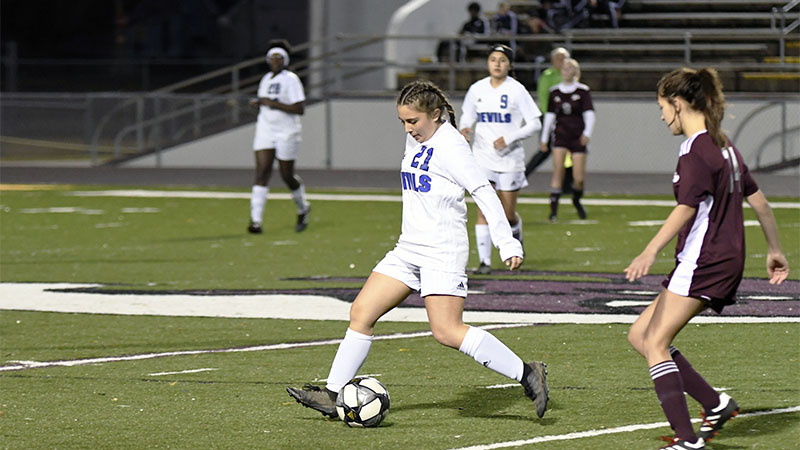 Playing Up: Eighth Grader Leigha Trahan passes to a teammate during a Lady Blue Devil game. Photo by Jonathan Mitchell.

Allison Cunningham scored off of a Cleo Bourne assist, but some lapses on the defensive end cost PRC the game.

The athletes had minimal playoff experience, but Head Coach Joe Weems said even with that minimal background his players weren’t scared of performing on the big stage.

“They seemed pretty loose, pretty excited and acted like they were ready to play. I don’t know if (nerves) were too much of a factor,” Weems said.

The team only had three seniors in the squad, so the majority of the athletes from this year’s playoff run are expected to be back next season.

While some of the veteran players who are leaving play in key positions, Weems is hoping this year can serve as a foundation for his younger athletes to build on.

“These girls are still learning to play with each other. Next year is a whole new year and I hope we can replace the ones leaving, but I do think this group will continue to get stronger. We’re a lot better than we give ourselves credit for and it just reinforces that confidence we need from the start; that we are capable of reaching the playoffs and capable of winning games in the playoffs,” Weems said.

Athletes will now head into the next season expecting to make a deep playoff run, which wasn’t the case going into this year.

“I think what they’re going to take from this season is where they ended up, which is the second round of the playoffs, and they’ll start expecting to win games next year. Hopefully it’ll do nothing but promote the program and hopefully heightens that awareness that they have the capability of winning games,” Weems said.

The team was able to get through the season with minimal difficulties regarding the COVID-19 pandemic.

Very few athletes went into quarantine, and the team only had one opponent reschedule a game due to an outbreak.

It was a season like no other, so Weems is hoping things will start to calm down and revert back to the way things were before the virus flipped the world upside down.

“We’ll continue to plan some practices and possibly try to get some scrimmages through the summer. Hopefully we’ll stay conditioned and hit the ground running in August, which is the normal time we start. We’ll just try to up the ante a little bit and do more practices this year since we lost a month last year. I hope to get back to a more normal schedule,” Weems said.