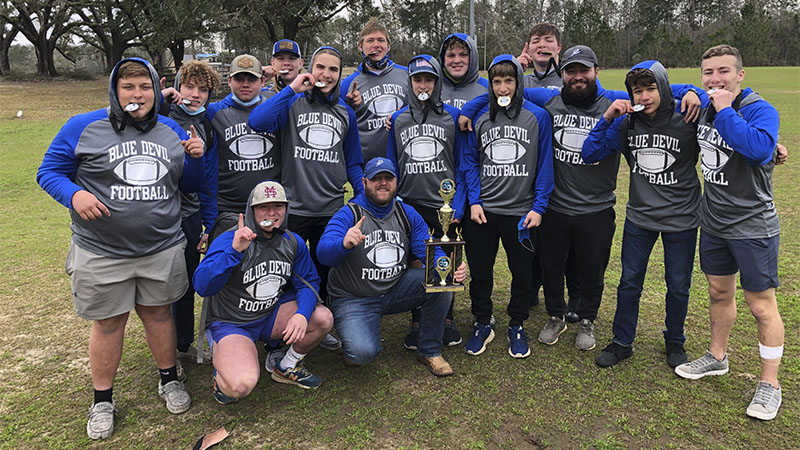 Strongest: The PRC powerlifting team poses with its trophy and medals after earning the title of regional champions last weekend. Submitted photo.

Coach Jacob Owen said his athletes had been lifting every day, even staying late certain nights, and that winning the championship meant the hours spent in the weight room were worth it.

“Any time you put the word ‘champion’ beside your name you’re going to be ecstatic and the guys were very happy. They felt vindicated that their hard work had paid off. When you match up against everything in your region and pound for pound you’re the strongest team it’s a major accomplishment,” Owen said.

The athletes on the weightlifting squad are also part of the football team, which Owen is in charge of as well.

“That’s something we focused on this offseason was discipline. Getting up there, listening for commands and doing things the way you’re supposed to do it (is important). Several guys hit personal bests Saturday as well, which is a great accomplishment. Success breeds success and any time you can go somewhere and have success and win you hope that will carry over,” Owen said.

Winning the championship means the squad will now move on to South State, which will take place in mid-March.

Until then, the athletes will continue with the workout sessions that have so far led to success for the Blue Devils.

“We’re just going to stick to the program and keep doing what we’ve been doing. We’ll continue to stay after one day a week to work on commands, and pretty much just continue the same program we’ve been on for three years now. We’ll go over there and compete and I feel like we have chance to compete for a south state championship,” Owen said.

While the athletes were the ones who had to do the lifting, Owen said there was plenty of work done by other members of the squad that contributed to the team’s success.

“The work that Coach Cody Spiers and volunteer Noah McCkay did prior to the meet and at the meet was so important. There’s no way to do this by myself because it gets pretty hectic and I can’t have eyes on everyone, so it was huge to have them there as an asset for us,” Owen said.

Now the team will continue preparing in hopes of taking home a south state championship next month.