PRC hoops defeats Long Beach to get back on track 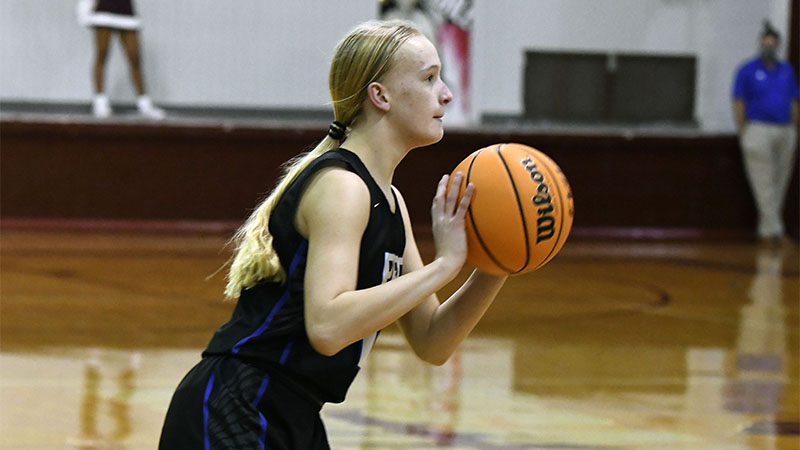 Beyond The Arc: Hannah Mitchell gets ready to shoot a three pointer during a Lady Blue Devils game. Photo by Jonathan Mitchell.

PRC had to battle from behind multiple times throughout the game before being able to take the lead and overcome Long Beach.

Head Coach Cliff Bauer said being able to grind out such a close game and earn a win is a positive sign for the team moving forward.

“It was a very emotional game for us which is good. It was very impressive from a coaching standpoint. I tell them all the time that winning and losing is not the main objective, it’s for them to show me how hard they play. Wins will happen if you do that. It did me good as a coach to see them fight and see the kids play hard,” Bauer said.

Winning close games has been one of the Lady Blue Devils’ strong suits this season.

Tuesday’s game was another example of PRC being able to close out tight games, which will come in handy as the team moves into district tournament play.

“We have a really good record in games within five points. It gives kids confidence that even though they’re down five they can come back (and win) in that type of situation,” Bauer said.

It also helps to have a player who isn’t scared of having the ball in their hands during those final moments, and for PRC that player is Hannah Mitchell.

The sophomore point guard helps orchestrate the team’s offense, and Bauer said no moment is too big for her.

Mitchell will be the team’s leader heading into the district tournament.

“She’s just that kid who embraces it and does want it. As young as she is, I think she’s ahead of her years as far as wanting the ball and her maturity,” Bauer said.