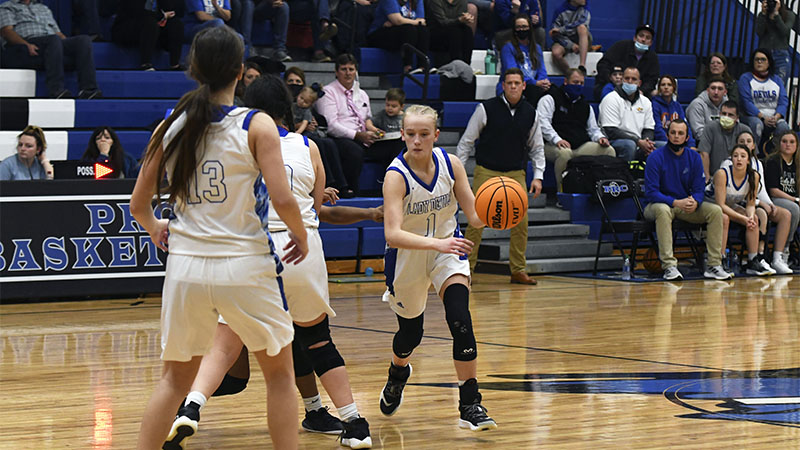 Set Play: Hannah Mitchell uses two screens to escape from her defender during a recent game. Photo by Jonathan Mitchell.

Pearl River Central’s Lady Blue Devils took on the Hattiesburg Lady Tigers with a chance to win a basketball district championship last Friday, but ended up losing the game 36-24.

Sophomore Hannah Mitchell had a double-double for PRC with 10 points and 12 rebounds while freshman Emily Carroll added 7 points of her own.

PRC had a hard time getting into a rhythm offensively during the defensive slugfest and the team’s two young offensive weapons weren’t able to find any easy buckets against Hattiesburg.

“Defensively we are pretty stinking good, but we’re still finding ways to score with the young kids. (Experience) is so big and the more you coach and the more you realize that. I think it played a role that our best scorers are a tenth grader and a ninth grader,” Head Coach Cliff Bauer said.

A tough loss to Hattiesburg might’ve led to some bickering as players struggled with their shot or missed a defensive assignment, but wasn’t the case for PRC. Bauer said he hasn’t had to do much this season when it comes to making sure the athletes understand the team comes first.

There are no egos in the Lady Blue Devils squad and each player is content to do whatever is necessary for the team to be successful, which will come in handy with playoffs starting this week.

“These kids are unlike any team I’ve been around. The kids make me want to be better as a coach. There’s no selfishness in the team and everybody steps into their role,” Bauer said.

While the Lady Blue Devils didn’t win the district championship, just making it to the game gives them a first round home game, meaning the girls will host Jim Hill on Feb. 18.

Bauer said hosting comes with a variety of benefits that includes not only avoiding travel, but also playing in a familiar environment with a favorable crowd.

“Nobody wants to travel three hours to and from Jackson, and it’s going to be cold. I think it’ll play to our benefit we’re right here in our house,” Bauer said.

Tip off is currently scheduled for 6 p.m.