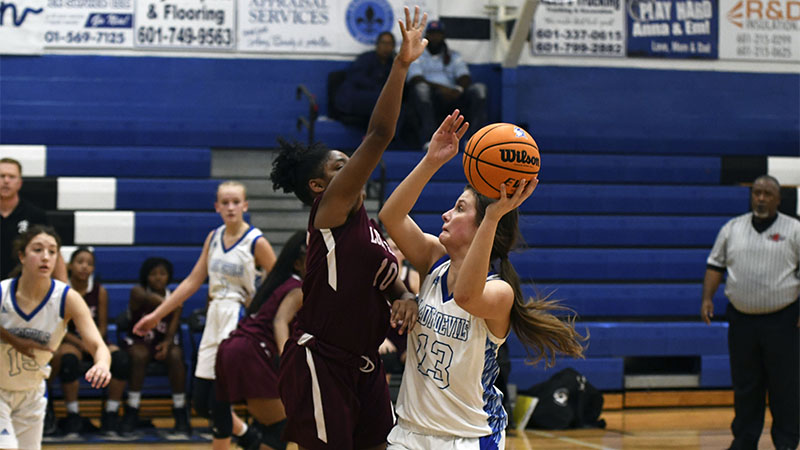 Contested: Senior Anna Carroll looks for a teammate to pass to as a defender closes her down during PRC’s district tournament game Monday night. Photo by Jonathan Mitchell.

The back and forth game was highly contested since the two teams were evenly matched.

However, it was PRC who came out on top thanks in part to some clutch shots late in the game.

A win is a win, and Head Coach Cliff Bauer said even with the performance being far from perfect he’ll happily take the result.

Jada Lindsey was a force to be reckoned with all game for the Lady Blue Devils.

The senior finished with 11 points, including a key three point shot that was just her second three pointer made this season.

“She’s one of our two seniors and I told her, ‘I need you to rebound and step up.’ She hit another gear (against Long Beach). I was very pleased with her. She kept us in the game on rebounds alone,” Bauer said.

Nia English was the team’s main contributor off the bench.

Not only did the sophomore have 5 points on the night, but her defensive intensity was key.

Other players feed off her energy, and Bauer said that’s one of the biggest benefits of having English on the floor.

“The reason she comes off the bench is because of her energy.”

“I bring her in with that purpose. When she gets in she brings everybody up. She gets me, the crowd, it’s so fun to watch,” Bauer said.

The Lady Blue Devils’ victory over Long Beach means the team will play in the championship game Friday at 5 p.m. against Hattiesburg.

The two teams have played twice already this year, with the Lady Tigers winning both match ups.

However, anything can happen Friday night as long as PRC’s athletes can deal with the nerves of playing in a district championship game.

“Skill level wise I think we’re close, but they’re big and aggressive. They’re going to press us all night, so a big part of this is making sure the kids are calm,” Bauer said.