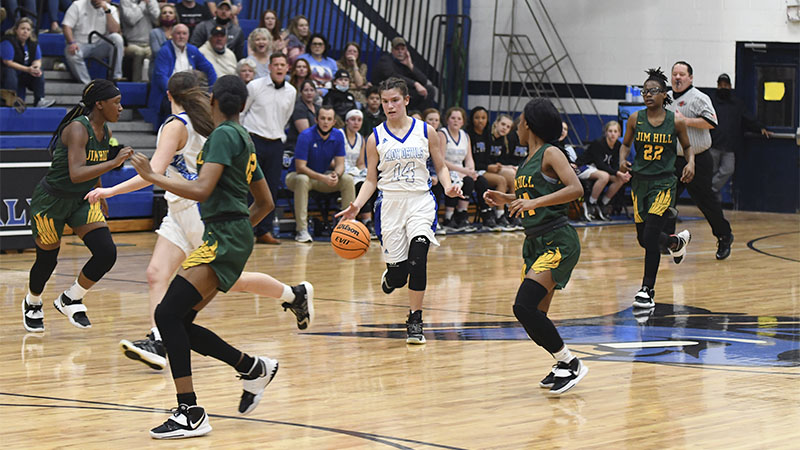 Pearl River Central’s Lady Blue Devils made great use of home court advantage and executed offensively all night to defeat the Jim Hill Lady Tigers of Jackson Monday evening 53-39 in the first round of the playoffs.

The two teams were tied 10-10 at the end of the first quarter, but PRC’s offense exploded in the second quarter and the Lady Blue Devils didn’t look back the rest of the night en route to the victory.

PRC had four players reach double digits, led by Jada Lindsey and Emily Carroll who both had 12 points.

Hannah Mitchell and Nia English both put up 10 points as the Lady Blue Devils were able to share the ball effectively throughout the game. Lindsey was a force to be reckoned with on the boards, and her mid range shot kept Jim Hill’s defense off balance all night as the senior showed out to keep the season going.

“She doesn’t give up. She dives (on the floor) and plays so hard, and the other kids feed off of that. She is a leader,” Head Coach Cliff Bauer said.

The scrappy matchup saw plenty of fouls called on both sides, but it was PRC’s intensity that ended up being the deciding factor.

“I think with this win, our kids just played hard like they do. That’s why we won was because of our effort level and we play as a team. I told them before it started, a lot of teams can come out and give it their best for two or three minutes. Very few can do it for 32 minutes. I want them to remember that kids can go hard for two or three, but great kids can go hard for 32 minutes and tonight we figured it out,” Bauer said.

The win means the Lady Blue Devils will advance to the Sweet 16, the second round of the playoffs where only 16 teams are now vying for a championship, and PRC will face Pascagoula on Feb. 24 at 6 p.m.

“I know we’re going to be in the Sweet 16, but wow it’s amazing. I’m so proud of these kids. (Pascagoula) will be athletic and talented, but I hope we play hard. That’s all I ever ask,” Bauer said.