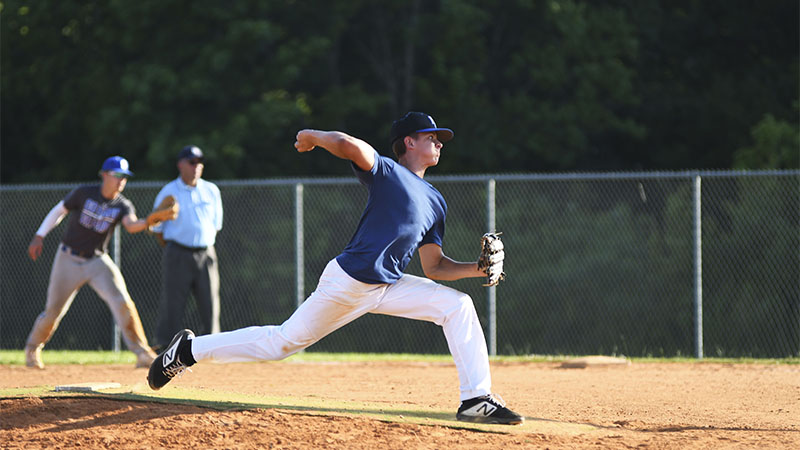 Getting Reps: Heath Brunson throws a pitch during a rec league game that took place over the summer. Photo by Jonathan Mitchell.

The scrimmages don’t count towards PRC’s official record. Head Coach Neil Walther said they’re mostly used just to get the players back in a semi-competitive environment against another team before the season begins.

“The jamborees are basically just to get nerves out and get guys some work on the mound. Then you might see some stuff you need to work on too,” Walther said.

Last season was cut short due to the COVID-19 pandemic, and although some of the players may have taken part in summer ball or club leagues, the requirements aren’t the same as competing with the PRC team.

However, Walther isn’t expecting the extended layoff without competition to affect his athletes because the majority of the players have plenty of starting experience.

“As a team they haven’t competed in 11 months and that’s one thing where the jamboree doesn’t necessarily help. I think they’re anxious to do that. The last couple of years this same group has started slow, then hit a stride and turned it on. Hopefully we can start off strong this season,” Walther said.

The Blue Devils starting line up is filled with players who have dozens of varsity games under their belts.

They understand what it takes to win, and the work it takes in order to earn those wins.

Walther said his experienced players are used to the grind of a long season, which will prevent any fatigue or weariness later on in the year when the games matter the most.

“I think the kids who have been out here and done it a lot, it helps them because they don’t wear down as much. They’re throwing a ball in some fashion six days a week, swinging a bat six days a week, sometimes seven if they do stuff on their own. At times over the past couple of years we’ve had some younger guys wear down and hit a little lull. That shouldn’t happen now because they’ve been through it,” Walther said.

The long layoff between seasons is something all high school teams are dealing with.

Walther is just hoping the extended period of time without games doesn’t affect his players’ mindset or ability to execute a game plan.

“Pro games are won with three-run home runs. In high school, three-run home runs don’t win games, what wins games is the other team making an error. If you execute and press people you can force those mistakes, and that’s it. That’s the game we play. It’s a totally different mindset, a different game, and for 11 months they haven’t been doing that,” Walther said.