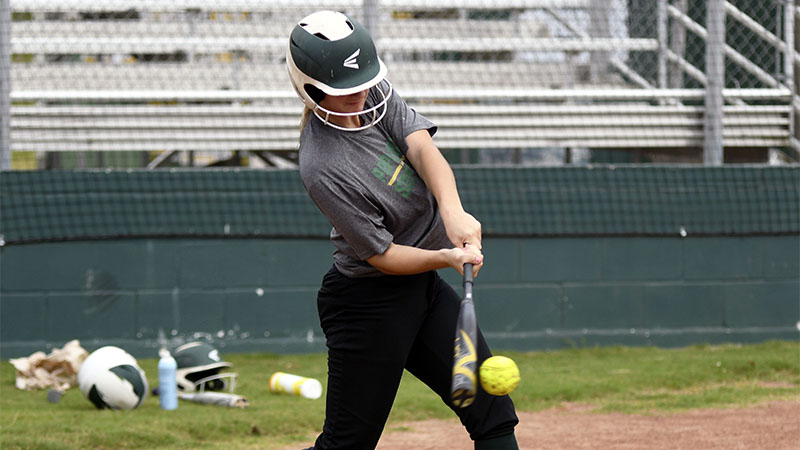 At The Plate: A Poplarville softball player goes through batting practice during a summer training session. Photo by Jonathan Mitchell.

The scrimmages served as a final point of evaluation for first-year Head Coach Janessa Deckwa before the regular season begins.

“Overall it was a fairly good day. We saw some things we needed to see in different positions while getting back into game mode. With a new coaching staff, learning how to work together in a game as well was important for us,” Deckwa said.

Poplarville lost several starters from last season, so it’s up to Deckwa to find the athletes who best fit those roles.

Competing in a jamboree where the games don’t count towards the team’s official record is the perfect place for the coaching staff to experiment and see what each player has to offer.

“We wanted to see what a few people would bring to the table and we were able to get them some playing time and see how they responded in certain situations as we get closer to finalizing our starting nine. We have some young players on the field this year that don’t necessarily have a ton of varsity game experience, so the games gave us an opportunity to see those athletes perform,” Deckwa said.

With the influx of new starters, the onus falls on the team’s returning starters to ease the inexperienced players into the line up and help them adjust to varsity softball.

Deckwa said her squad’s veterans have done a good job of helping the new starters acclimate quickly to the higher level of softball.

“It’s extremely important that we have three seniors this year and four juniors as well. Just them being able to teach younger players how the program is run and helping me as a coach keep the team in line whenever I’m not there. They are able to reiterate the things we’ve been doing for years to keep our program functioning the way we need it to,” Deckwa said.

The games also showed Deckwa some things her team needs to work on as regular season games begin.

Poplarville’s pitching staff is rather inexperienced, so the defense will have to be airtight in the back half in order to keep the pressure off the young pitchers moving forward.

“We could’ve used a little more aggressiveness on defense.

We have a young pitching staff so it’s just really important to play rock solid defense and have their back at all times. This will be Lily’s (Tines) second year throwing in varsity, but Daphne (Rohrbacker) has never faced varsity hitters before. Having that wall behind to support them is important,” Deckwa said.

The Backbone Of The Bulldogs