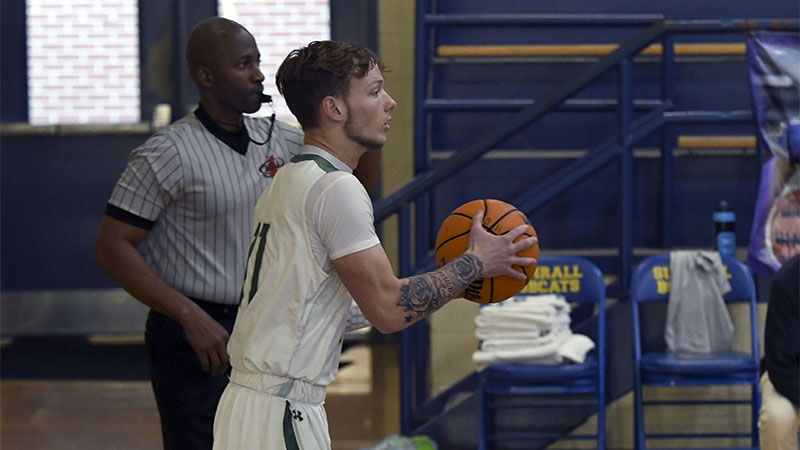 Inbound: Torry Polk looks for an open teammate while trying to get the ball inbounds. Photo by Jonathan Mitchell.

The Poplarville Hornets faced the Forrest County Aggies Thursday evening with a chance to advance to the district championship game, but ended up losing 55-36.

Poplarville had been on a bit of win streak, winning three games in a row with a chance to make it four against Forrest County.

It was an opportunity for the program to take a step forward and show the team is intent on winning the district championship, but Head Coach Run Bowen said his athletes came out flat against the Aggies.

“It was a step back from the way we had been playing. We won three in a row and were heading in the right direction, but I think we got a little overconfident. The kids didn’t practice well, a couple missed practice, and we showed up and the way we practiced showed up in the game,” Bowen said.

The effort seemed to be there, but execution was lacking against Forrest County.

Bowen said his players didn’t have the right mentality heading into the game, and it cost the Hornets on the court.

“The intensity was bad, but it wasn’t that as much as it was that the mental focus on the game wasn’t there. Sets we’ve been running for four years, a couple guys didn’t know how to run it or would run it wrong,” Bowen said.

The loss means the Hornets won’t advance to the district championship game, which could hurt Poplarville when the playoffs start.

Instead of getting to play a first round playoff game at home against a lower seed, the Hornets will have to travel to a top seed in the first round.

“These guys bounce back pretty quickly. They know they put themselves in a hole they have to dig out of. If they want to keep playing they’re going to have to step it up,” Bowen said. A big focus moving forward will be making sure the players don’t get too individualistic.

Poplarville’s system is based on the principle of sharing the ball and playing as a team, instead of relying on one superstar player.

The Hornets will need to get back in that mindset as they prepare for the playoffs.

“We have the team and when they play hard and together we can compete with anybody. But when you have one or two that’s not focused it affects the whole team because you have to have five,” Bowen said.