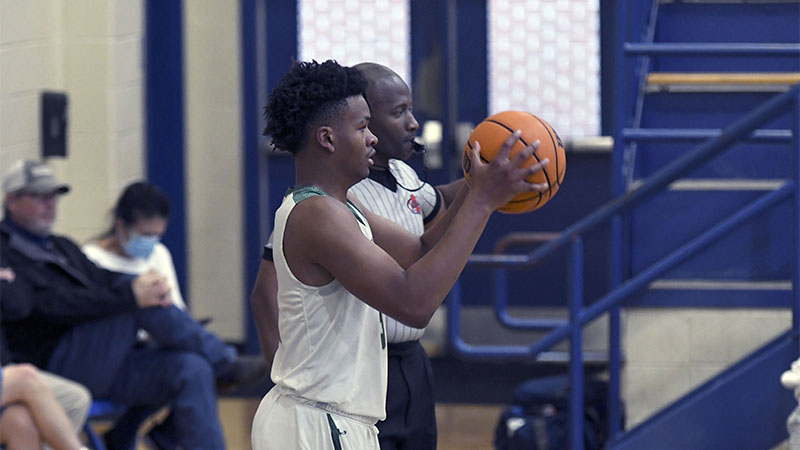 Hot Hand: Amari Gilmore looks for an open teammate while trying to inbound the ball. Photo by Jonathan Mitchell.

The Poplarville Hornets and Greene County Wildcats battled for a playoff berth Saturday night and the Hornets secured it with a 62-45 win.

Dante Buckley had 14 points and 6 assists, Torry Polk had 16 points and Semaj Young had a double-double with 10 points and 10 boards.

Riley Josey had 6 points and 12 rebounds along with Quan Huderson who added 6 points as the underclassmen helped the trio of seniors run Greene County out of the gym.

Young has especially stepped up his performances as the senior fights to stave off the inevitable.

“I think he’s one of the only ones that realizes the next game could be the last game for him, so it’s important to him. He wants to keep playing and he’s willing to do whatever it takes to keep playing. He knows he has to get his brothers on the team to go along with him to keep things going. You could tell over the last couple of games he didn’t want this to end,” Head Coach Run Bowen said. Young and the team’s other seniors will need to be at their best when Poplarville takes on the Raymond Rangers in a first round playoff game Feb. 19.

Raymond loves to pressure the ball and will do so for the entire game, so handling the press will be imperative if the Hornets want to come away with a win.

“In the past when we played teams that did put pressure on us we didn’t perform well, but we are playing a little better (recently against pressure). If we can withstand the pressure they bring we can keep it competitive,” Bowen said.

The Hornets had success digging into the bench while the starters get a bit of a breather.

When playing against a high pressure team like Raymond, the Hornets will need to sub early and often in order to keep the athletes on the court fresh, which means Poplarville’s bench players will be key in holding off the Rangers.

“I think it’ll be about the few guys who come off the bench that are a little younger, that give us depth. That’ll be the decision maker. If they can come in, handle pressure, not necessarily score a lot but take care of the basketball and get the main guys some rest I think that’ll go a long way,” Bowen said. The first round match up will take place at Raymond with tip off scheduled for 6 p.m.