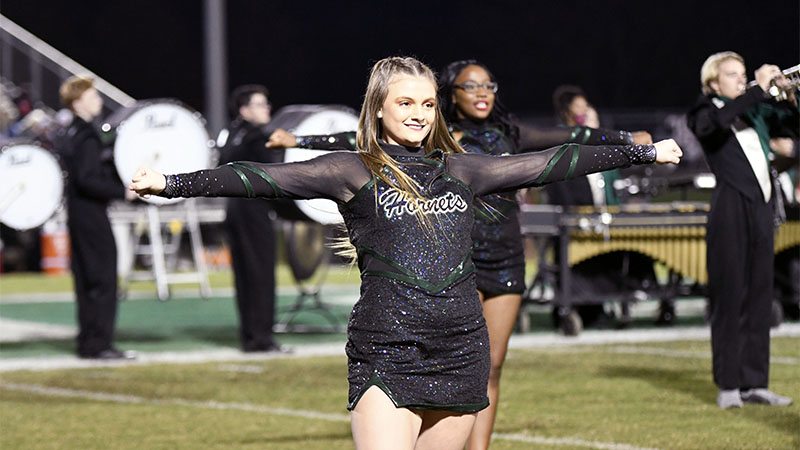 No Competition: Brie'Anna Miller goes through her routine during a halftime performance. Photo by Jonathan Mitchell.

The Poplarville dance team practiced all year for a chance to take part in the state competition in December, but instead the team was sent into quarantine just days before the competition after several dancers tested positive for COVID-19.

The team then planned on participating in a different competition set to take place in late January, but it ended up being cancelled, which left the dancers with no opportunity to perform their routines in a competitive environment.

Senior Sophie Williams was a team captain and said not being able to compete was a tough pill to swallow after spending countless hours learning and perfecting routines.

“When I first found out it was pretty hard. I had a little breakdown and it was very hard. But I knew it was better since we’d all be more safe knowing three people had tested positive,” Williams said.

As one of the veterans in the squad, Williams was partially responsible for keeping the dancers focused throughout the year.

Dealing with COVID-19 protocols and competition cancellations was tough, but Williams said she did what she could to help ease new members into the group.

“It was a little difficult with a lot of questions because there were a lot of new people on the team. I just tried my best to make it seem normal as the other years have. I was really exited about this year. I was the only one on the team with a state championship. I got it my freshman year, so I was pushing to get another one this year. We had a chance to do it with the dancers we had, so when two days before the competition we found out we couldn’t go it was difficult to handle at the moment,” Williams said.

Director Kelsey Campbell said the dancers grew closer as the year went on, partly due to the circumstances of having to deal with the pandemic.

While not being able to compete is disappointing, Campbell said the dancers did a good job of dealing with all of the obstacles this year threw at them.

“I can honestly say this is probably the best I’ve ever seen. It was a solid group of 10 girls with absolutely no drama, no bickering. It was truly a team of best friends. They worked hard together. They had to face a lot of difficulties and they always did it knowing it’s God’s will. This happened for a reason and God has his hand on us, and now we move forward from here,” Campbell said.

The team will have its banquet later in the month before preparing for a new season that’ll begin when tryouts take place towards the end of March.