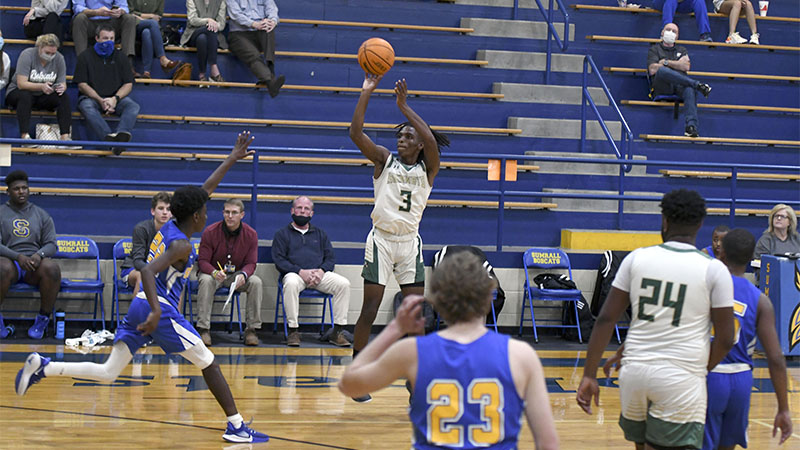 The Poplarville Hornets dominated from the opening whistle against Sumrall Tuesday night winning 76-36.

Poplarville was up by 10 at the end of the first quarter and never slowed down en route to the squad’s first round win in the district tournament.

Amari Gilmore had 16 points against the Bobcats as he consistently hit shots for the Hornets.

Poplarville’s sharpshooter had been struggling with his shot leading into the game, so the offensive outburst could be a sign the sophomore is back in rhythm as a dangerous offensive weapon for the Hornets.

“He started hitting them and with the mindset he was in this will help him get out of it. He needed to see the ball go through the net,” Head Coach Run Bowen said.

Torry Polk also had a big night for the Hornets with 16 points, including several threes.

The senior has taken on a leadership role for the team, and his experience helped with the Hornets’ execution offensively.

“He’s probably one of the few that would be vocal at times.”

“He’s a guy that will take that role and now he’s not only being vocal, but he’s also doing it with his offense. He’s always been that way defensively, so it’s good to see him add offense to it,” Bowen said.

A 40 point win means a lot of things went right for Poplarville, but Bowen said there are still some mistakes that need to be cleaned up.

The main source of frustration for the coach against Sumrall was the team’s turnovers.

Against Sumrall the Hornets were able to overcome that, but against other competition that may not be the case.

“There were moments we were really loose with the ball and I’d like to see that go away.”

“Those little things you can get away with against teams that are maybe a little less athletic than you, but if we go (against tougher competition) you can’t do that stuff you’d get run out of the gym,” Bowen said.