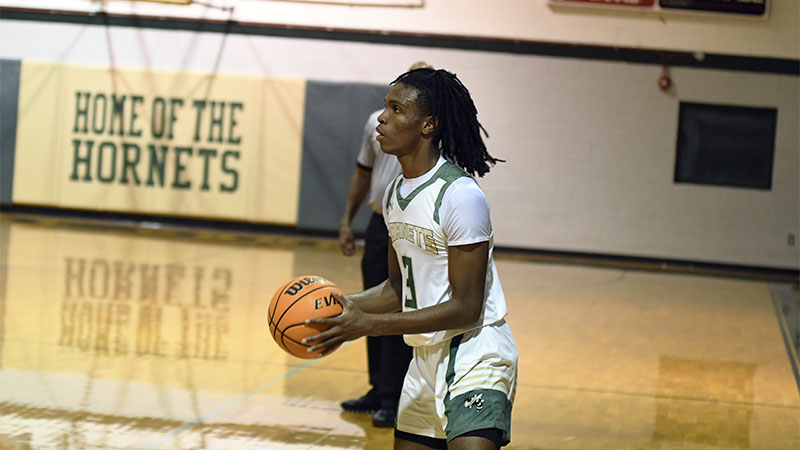 Stay Aggressive: Dante Buckley receives a pass and looks for an open teammate during the Hornets' win over Greene County. Photo by Jonathan Mitchell.

Poplarville went two for two against Greene County on the hardwood tonight with both Hornets teams winning.

The Lady Hornets defeated the Lady Wildcats 50-33 thanks to a strong offensive showing.

The Lady Hornets embraced their identity and gave it their all the entire game, which is what Head Coach Robin Jeffries was hoping to see against a district rival like Greene County.

“We played exceptionally well tonight. We’re not doing anything different, they just have to step up and play like I know how they can play. Everything we did tonight we’ve been practicing. We just finally decided to step up and do our best at it,” Jeffries said.

Poplarville and Greene County went back and forth all night with lead changes being the constant of the game.

However, it was the Hornets’ execution in crunch time that led to the team’s 43-41 victory.

Amari Gilmore hit a clutch fade away to put the Hornets up, but Greene County responded with a bucket of their own to tie it 41-41 with the seconds running out.

On Poplarville’s next possession a miss led to a Semaj Young put back that cleared the net as the buzzer sounded to give the Hornets the last gasp victory.

Not only did the Hornets get the win, but there were plenty of positives to take away from the performance, including the play of some of the squad’s younger athletes.

“I’m proud of my younger guys. Will Harry hadn’t played this year, but he came in and got us some big rebounds. I told him, ‘Your job is to defend and rebound.’ And he did that (for us tonight),” Head Coach Run Bowen said.