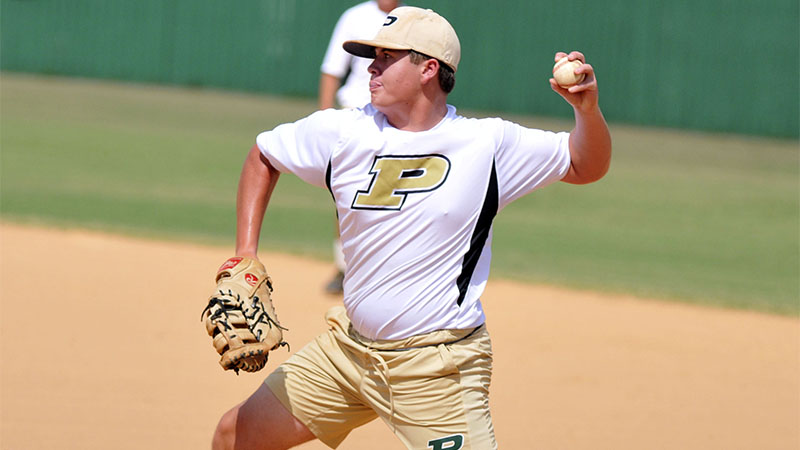 Fast Start: Joseph Blakeney fires a ball to third base after fielding a grounder during a Poplarville practice. The team’s defense has played well, but offensively the Hornets are clicking and have scored 10 plus runs in all three games this season. File photo by Jonathan Mitchell.

Poplarville’s bats are heating up and the team’s offense was unstoppable Tuesday evening in a 20-3 Hornets win over Pine LA.

Head Coach Slade Jones said his players’ discipline at the plate paid off with the athletes able to take advantage of pitches down the middle.

“Our kids don’t chase. Even if we get beat, we take pride in not chasing pitches out of the zone. The way that turns out working is if they throw a lot of strikes, then we hit a lot. It was just one of those nights where everybody was feeling good and some balls fell for us,” Jones said.

The early season blowouts will soon transition into hard fought games as the level of Poplarville’s competition increases.

This is a purposeful choice on Jones’ part when creating his team’s schedule because it allows the players to have some positive performances before going up against some of the best teams in the state.

“In our division, I don’t know what’s going on, but the 4A south is beating all the good 6A schools. A lot of that is because of pitching. The pitching in our district is as good as anywhere and it seems everybody has several of them.”

“It will definitely get more competitive on the mound and it’s good news the schedule works out like that. The week before district we face Biloxi, Stone and Oak Grove. That lets us build confidence early and the more we play the tougher the competition gets,” Jones said.

Poplarville’s lineup is constantly shifting, but not because Jones is unsure of what his players are capable of.

The athletes are talented enough to adapt to multiple positions and different spots in the lineup, so Jones is able to mix and match players depending on who’s pitching.

“I wouldn’t say anyone is ever really set in stone here. We have a group of core guys, 12 to 14 players off the top of my head, and it’s kind of a plug in deal. Sometimes guys get uncomfortable at the plate and we give another one a shot,” Jones said.

The rotation will continue throughout the season, including the team’s next game against St. Patrick on March. 2.

That game will be a precursor to a matchup against county rival Picayune on March 4, but Jones doesn’t want his players to get ahead of themselves.

Every time the athletes take the field it’s an opportunity to improve, and it’s important the Hornets take advantage of that.

“I want to see them play against the game more than the other team, take care of things we can control and at the end of the game we’ll look at the scoreboard. Just keep their nose to the ground the whole game and play like there’s no score,” Jones said.