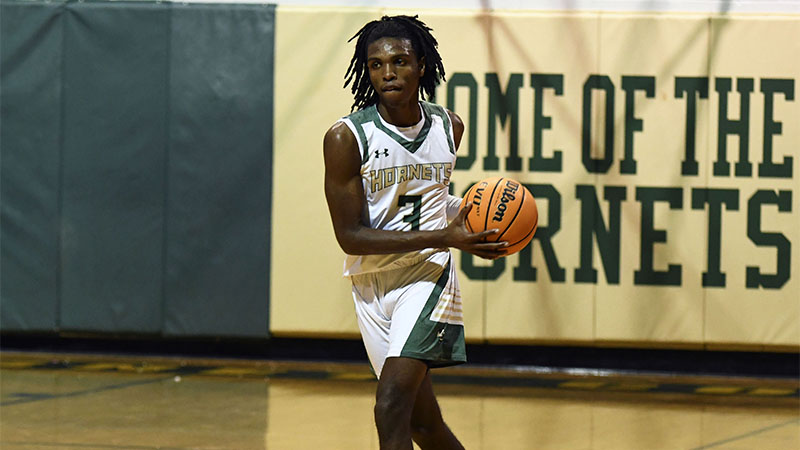 Poplarville and Forrest County battled on the hardwood Friday night with the Hornets winning both games.

The Lady Hornets won 57-38 in a physical game where Poplarville tried to take advantage of an undersized Forrest County team on the boards and in the paint.

Poplarville’s veterans showed up on senior night with Nashanti Tillman and Deanna Freeman both putting in solid performances.

The Lady Hornets pushed the ball all game, and forced some turnovers that resulted in easy lay ups.

“On offense we executed as much as we needed to because we didn’t have to run that many set plays. We were able to penetrate with the ball and get easy points around the basket so we did alright there,” Head Coach Robin Jeffries said.

The Lady Hornets had a distinct size advantage on the Lady Aggies, which should’ve translated to a good performance on the boards.

However, Forrest County had several active rebounders that negated the height difference between the two teams.

“I think we gave up too many boards with the size we have, especially against their team that was outsized. We should’ve controlled the boards a little better but we didn’t,” Jeffries said.

A strong defensive performance helped the Hornets win handily against the Aggies 55-30.

Head Coach Run Bowen said he liked his team’s intensity on the defensive end of the floor to hold Forrest County to just 30 points.

Bowen wanted his players to come out with effort and the Hornets answered the call, especially senior guard Torry Polk who took on the facilitator role to great effect against Forrest County.

“That’s a tough hard nosed kid. Having him lead the show at times is good for the other guys because they trust him,” Bowen said.

Poplarville showed good energy defensively all night and was able to limit Forrest County’s ability to get easy buckets.

However, several Hornets ended up getting into foul trouble, which Bowen wants to see improved.

“The only complaint I have is that we fouled too much and gave them free throws. We were aggressive, which is good, but we have to be aggressive without fouling. We do that and I’m happy,” Bowen said.