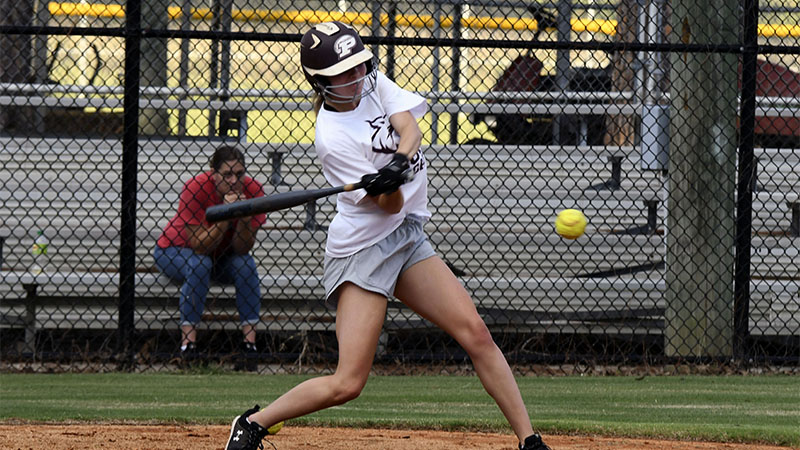 In The Box: A Picayune hitter works on her swing during a Lady Maroon Tide practice. Photo by Jonathan Mitchell.

The early season game between the Picayune Lady Maroon Tide and Harrison Central Red Rebels Tuesday evening ended in a 12-1 loss for Picayune.

Sarah Stockstill had an inside the park home run after hitting a laser to center field to give Picayune its only run of the game while Skylar Timmons recorded a single and a walk for the Lady Maroon Tide.

Head Coach Courtney Dickens said she was expecting a better performance, even with several young players in the line up.

“Harrison Central is a really good team and we knew that going in, but I would’ve liked to see us compete a little bit better.”

“I did start four ninth graders and I know (Harrison Central) had a team full of seniors, but like I told the girls after the game, nobody cares. They don’t care how old we are, we have to compete with them,” Dickens said.

Picayune had a hard time getting anything going offensively against a talented Harrison Central pitching staff.

The youngsters may not have gone up against that caliber of pitching before, but Dickens said her seniors knew going in how talented Harrison Central is seeing as the two teams play each other every year.

“For sure the four ninth graders had never seen pitching like that before, but I was expecting a little more from my seniors. (However), for the most part we were putting the ball in play and even those who struck out fouled some off. We had some good at-bats. That was one positive thing,” Dickens said.

Hitting has been a focus this year for the Lady Maroon Tide partially because Dickens felt the team needed improvement in that area, and also because of inclement weather that would force the team to have practice inside the batting cages.

Reading pitches and having players understand where they are in the count have been areas of emphasis for Dickens.

“We’ve been working this year on shortening up our swing whenever we have two strikes on us. I’ve been talking to them about what pitches to look for at certain counts. It’s all about knowing when you have a hitter’s count,” Dickens said.

The team’s next game will be against Pass Christian Saturday at 1:30 p.m. as Picayune continues moving through these early season games.

It’s a period of experimentation for Dickens as she uses matchups like the one with Pass Christian to test her players and see who would best benefit the team when district play rolls around.

“I’m trying to get as many kids in and use these games now before we start district to give kids an opportunity to see what they can do and can’t do. I like playing young kids because I’m going to have them for awhile, and I like giving them that varsity experience early if I can and if I feel they’re ready for it,” Dickens said.