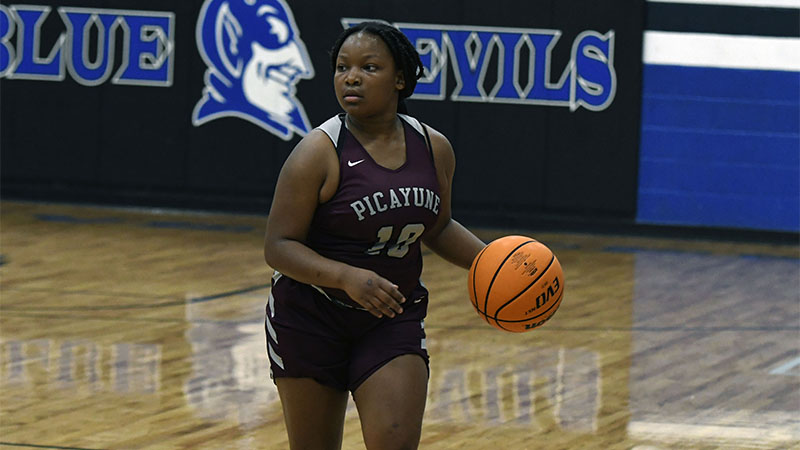 Aggressive: Point guard Alex Fields surveys the court as she dribbles past half court. Photo by Jonathan Mitchell.

The Picayune Lady Maroon Tide and Hattiesburg Lady Tigers faced off in the first round of the district tournament Monday night with Hattiesburg coming out on top 65-18.

Picayune had a hard time getting anything going offensively against a physical, aggressive Hattiesburg team.

The young Lady Maroon Tide athletes had issues handling the Lady Tigers’ full court press, but for Head Coach Toby Bush, games like these are great learning experiences for his athletes.

Alex Fields was the team’s bright spot offensively and led the team with 6 points.

The junior point guard was aggressive on both ends of the court, which is a good sign of things to come for the Lady Maroon Tide.

Picayune’s next game will be against Long Beach, at Pearl River Central High School, on Feb. 11 at 5 p.m.

There are several things Picayune will focus on leading up to Thursday’s game.

One area in which Bush wants to see improvement before the Long Beach match up is on the boards.

Picayune needs to do a better job of limiting opponents to just one shot by boxing out and rebounding.

Cleaning that up while minimizing mental mistakes can help Picayune defeat Long Beach.

“We have to limit offensive rebounds those killed us, that and our turnover situation. Those have been our biggest issues all year, offensive rebounds and turnovers. If we clean those things up we’re in pretty good shape,” Bush said.