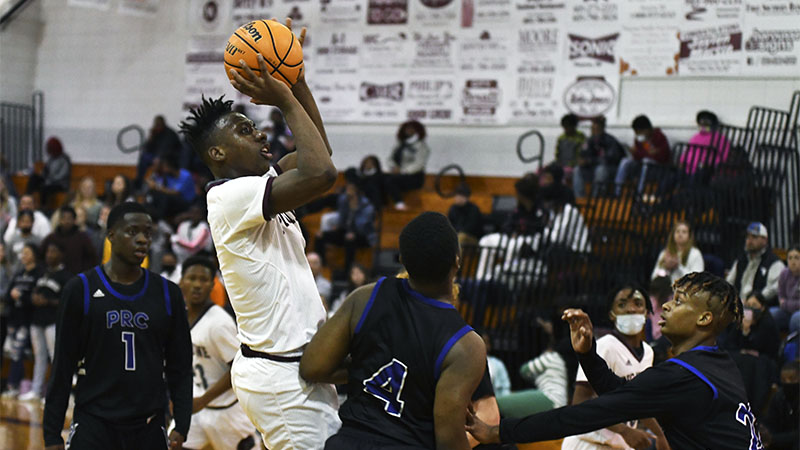 Elevate: Picayune has taken on a defense first mentality this season that has yielded great results throughout the season. Photo by Jonathan Mitchell.

The Picayune Maroon Tide basketball team finished its regular season with a close loss to the Hancock Hawks 52-48.

Even with senior Derai Jones filling the stat sheet with 21 points, Picayune wasn’t quite able to overcome Hancock.

“Those guys run their plays hard and you have to give credit to them they created some trouble for us. We tried to make a push and we came close, but we just couldn’t take it over and make enough plays, enough stops, to win that game,” Head Coach Eric Vianney said.

The game was Picayune’s final one before the district tournament that starts this week.

Hancock presented a unique challenge to Picayune, and now the athletes will use last week’s finale as a learning opportunity in preparation for this week’s games.

“They have some similarities with a couple teams in our district. We can see that maybe this game will help us get ready (for the tournament),” Vianney said.

The Hawks were one of many talented teams Picayune took on this year in a schedule that included some of the best squads in the state.

Vianney wanted to challenge his players and expose them to different types of competition, and Hancock served as another opportunity for the athletes to test themselves.

“Our schedule was very packed and we played some very good teams, sometimes against better teams than we are with different styles in different environments so you can prepare yourself for this type of situation to go win on the road. It’s something to embrace and learn from,” Vianney said.

Picayune is hoping to win both district tournament games this week to earn a number one seed heading into the playoffs, which will give the team a lower seeded opponent for the first round of the postseason.