Picayune hoops picks up seventh win in a row 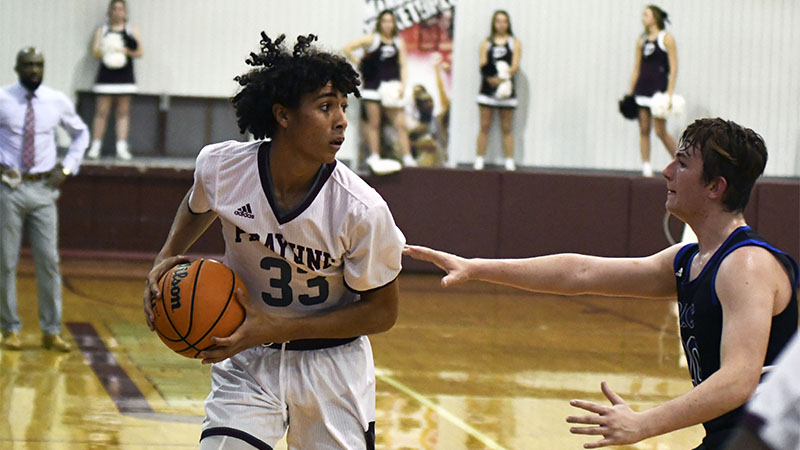 No Space: Isaac Brice surveys the court as a defender prevents him from dribbling. Photo by Jonathan Mitchell.

The Maroon Tide kept on rolling with a 62-49 victory over Long Beach Friday night to extend the team’s streak to seven games.

The two teams met earlier in the season with Picayune winning that match up 54-39, so neither team was completely in the dark regarding their opponent’s strategies.

“I think those guys played hard. It was interesting because when you play somebody twice they learn how you play and you learn how they play. Long Beach came and were successful early in running their plays, so we had to dig down a little bit to get back into it,” Head Coach Eric Vianney said.

Vianney made sure to prepare his players for the battle against Long Beach knowing the Bearcats would understand Picayune’s style of play.

However, the team’s inexperience proved to be a slight hindrance in recognizing that just because the team won the first game didn’t mean the second match up was a guaranteed victory.

Picayune’s seven game win streak has come on the back of some strong defensive showings that limited each opponent’s scoring opportunities.

Watching tape and understanding what the team did right and wrong has proven to be a good tool for keeping the players focused and help them understand what’s led to the string of consecutive wins.

“What we’re trying to do is keep these guys level headed, humble and to stay hungry because the next game is no guarantee. If you have a little success and don’t value the success by understanding how you got there you can lose it so easily. That’s why after games we watch film so you learn about yourself and kind of revisit the things we did well and the things we didn’t do well,” Vianney said.

Picayune will close out the regular season with an away game against Hancock Friday night.

The results of that match up won’t affect the team’s seeding in the district tournament, but Vianney said that’s no excuse for the players to not take the game seriously.

“We’re going over there with the opportunity to compete. You can’t sit and wait for the district tournament. You still have to get on the floor. You have to stay active and find a way to compete,” Vianney said.